MUSIC FROM THE MOTHERLAND | While Empire of the Sun tease us with their much anticipated second album, we salute those Aussie guitar gods who have rocked our socks. 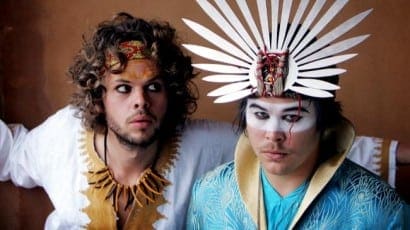 Hurry up already
Like the proverbial carrot being dangled under our noses, Empire of the Sun’s second album is progressing along slowly with demo’s being provided to their record label EMI and a new single planned by the end of the year.

The super-duo of PNAU’s Nick Littlemore and Luke Steele from Sleepy Jackson hit the world stage with their electro pop release ‘Walking On A Dream’ in 2008 before an awesome show at 2010’s Glastonbury Festival where the Motherland danced away happily on the hill.

Fast forward to 2012 and the boys are still laying down the work in the studio while fans are patiently waiting and EMI are no doubt impatiently looking at their watches outside the studio.

It’s a big surprise this eccentric duo managed to get one album out let alone two so we should view it as a bonus. Steele is a renowned music control freak having sacked previous Sleepy Jackson members including his own brother. Littlemore is just random, having not appeared at numerous live shows then disappearing for a month in 2010, only to surface in America with the excuse he’d lost his phone after falling in a pool in Las Vegas. Totally rock and roll!

But they’ve got back to together and hopefully will (finally) have some more music for us soon. We’re just thankful we’re not the suits at EMI watching their watches.

Triple J to unearth Indigenous music talent
The love an unearthing around the Triple J offices, don’t they just? It’s become a brand in itself, what with the launch earlier this year of Unearthed radio as well as the popular website for bands and artists to post their new music in the hope of getting noticed.

Now they’ll continue their good work of finding new music across Australia with the announcement of their partnership with the National Indigenous Music Awards (NIMA) to find Australia’s newest Indigenous music star.

The awards, which are held in Darwin every year, recognise the best Indigenous music in Australia. The unearthed award will be decided by public vote and then by a panel of judges and will give an unsigned act an opportunity to gain national coverage and also perform at the awards in August.

A nod to the best shredders of Oz
Australian Guitar Magazine has given us another list to debate and poke holes at – with the release of their 50 Greatest Australian Guitarists. Taking the gold, silver and bronze was Angus Young (AC/DC), Tommy Emmanuel and Ian Moss (Cold Chisel) in that order.

Chris Cheney from The Living End and Rick Brewster from The Angels rounded off the top five while going past the top 10, the guitarists are listed in no particular order (must have got bored after 10).

Actually it’s a pretty comprehensive list with most classic Australian bands and solo artists represented. It would have been nice to see some more female players with only Adalita (Magic Dirt & solo artist) getting props. Surely Mia Dyson deserved a nomination?

Oh well, that’s about all the controversy we could find. Looks like the laziness has hit us too.

Any other Aussie guitar gurus that would be in your Top 5? Tell us below: