After a stellar season at the Edinburgh Fringe, critically acclaimed Aussie theatre maker, Stuart Bowden is back in London for the premiere of his solo show She Was Probably Not A Robot. 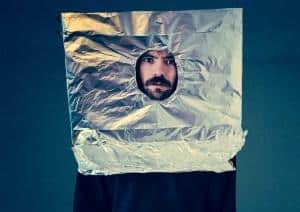 MEETING up in Shoreditch for a pint, I watched Stuart Bowden cruise down Brick Lane on his Barclay’s bike, lock it up and give me a hi-five.

The award winning Aussie theatre maker from Gippsland, Victoria looks like a Londoner at heart. He has an impeccable, thick brown beard and floppy hair. He wears a dark green corduroy coat, looking like he’s just stepped out of one of the vintage clothing stores down the street.

She Was Probably Not A Robot is his most recent solo show that is being performed at the Camden People’s theatre for just three days this week.

He’s performed at Edinburgh three years running, not just at the fringe but also once in the actual festival (“the one no one hears about”).

This is the first time that She Was Probably Not A Robot has been performed in London, though Bowden has been previewing it since March. The play has been described as a ‘low-fi, off-beat, sci-fi story telling experience.’

Bowden himself labels his show as ‘DIY’. To explain this interesting choice of words, he said: “It has this feeling of theatre that there is no production values or budget it’s just me putting things together.”

No sooner had he begun to explain this concept a little further, a man plodded past the pub struggling to transport a mattress on his head. When Bowden saw it, he chuckled, “That’s DIY!”

The idea for She Was Probably Not a Robot came to Bowden quite obscurely. He said: “I had the idea for a little while, about a guy who has survives the end of the world because he falls asleep on his air mattress as the world floods and he gets swept out to see.”

Bowden was trying to fill a 5-minute slot where he connected to a melodica to a blow up mattress and perform as the mattress deflated. He said: “I didn’t end up making it, I ended up making an hour show without that.”

Improvisation is a large part of the show. Bowden explained that once he’s in the audience, he likes to see where the show will go. Gesticulating wildly donning a big grin on his face, he describes the thought process behind his performance: “The show isn’t really scripted, it reads: ‘this is the bit where I dance around on the air mattress and maybe I talk about stuff.’”

The 29 year old graduated from the Victoria College of Arts in 2007, spent a year touring with Bell Shakespeare and began writing his own shows in 2009.

He said: “I’ve forced myself to just make a lot of work,” after spending a year preparing for auditions that he might not get. “I learnt from VCA that you can perform anywhere if you can write your own show. I could stand up and perform right now.

Bowden has the ability to perform anywhere and holds an arsenal of talents to support him including comedy, improvisation as well as being a musician. He loves to work both alone (including even taking tickets at the door) and as a group.

His philosophy is: “So long as the audience are there being responsive and caring for the show, I’m going to care for the audience.”

Despite all his successes in the UK, he still misses home and says it’s hard to compare life in London to that in Australia, where Bowden grew up on a farm.

He still loves London though and feels like it’s a great place to be. He said: “After living here for a while I started to feel so comfortable.”

But, like all of us, walking through the center of the city still has that magical feeling: “Occasionally I’d see something and think whoa! I’m in London, I feel like I’m on holiday.”

After a pint, Stuart Bowden had to head home to prepare for the premiere on Wednesday. We said our goodbyes outside Shoreditch High Street station where I grabbed the tube home and he cycled off into the distance on his bike.

She Was Probably Not A Robot is at Camden People’s Theatre from 11th – 13th December. Click her to book tickets.