AUSSIE COMEDY | "The heckler's girlfriend yelled at him in front of everyone and screamed "You're not getting sex for a week!" and then walked out. I shit you not!" 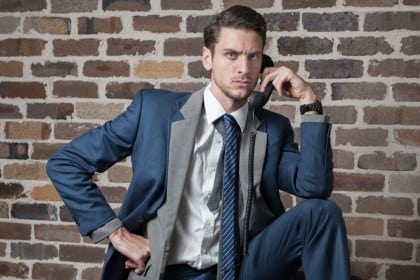 He`s relatively new to the international stand up comedy scene, but Steen Raskopoulos has been entertaining Australian audiences for years. He’s at the Edinburgh Fringe right now and about to hit London.

Circa Sydney 2010, he was known for his entertaining sketches in the weekly group improv routine Full Body Contact No Love Tennis. By 2013 Raskopoulos became a comedic sensation almost overnight with his own first solo sketch show, bruce springSTEEN LIVE IN CONCERT!. He was also a Nominee of the Best Newcomer 2013 Melbourne International Comedy Festival and Winner of the Best Newcomer 2013 Sydney Comedy Festival.

If you have been keeping up to date with your Aussie television, you might also be familiar Raskopoulos’s work in Channel 7`s SlideShow or as an actor and writer of ABC2’s four-part sketch show, This is Littleton (2014).

During the Sydney Comedy Festival earlier this year, Steen performed a rare double-act show with his older brother, Jordan Raskopoulos from The Axis of Awesome, as well as his own ambitious individual sketch show, I’m Wearing Two Suits Because I Mean Business.

Steen found some time in his busy Edinburgh Fringe ‘Business’ schedule to answer a few pointed Australian Times questions ahead of his performances next week of I’m Wearing Two Suits Because I Mean Business at the Soho Theatre in London. Post a memo in your calendar.

Righto, so where did it all begin?

I started doing improv and sketch comedy at Sydney University which has a strong tradition of producing comedic performers such as Rob Carlton, The Axis of Awesome and The Chaser. Last year I thought I should try something different and that’s when I moved into solo sketch comedy.

When did you first realise that you were funny?

When I pissed myself at school and everyone was laughing. I felt pretty cool that day.

Your brother is another well-known Aussie comedian. Is he more your nemesis or your inspiration?

Definitely an inspiration. I always thought I was going to play cricket until I broke and torn tendons in my fingers. I essentially followed the same path as him, starting at university by performing in Theatresports and faculty revues before appearing in the Australian festival circuits.

I loved performing in New York and Chicago but I do enjoy performing at home in Sydney at the Giant Dwarf Theatre. It used to be the old Cleveland St Theatre in Surry Hills but The Chaser has now taken it over. I’ve never seen a bad night of comedy, so much variety as well.

Do you get many hecklers? Do you find them annoying or a challenge?

Not really. I do mostly character based stuff with some audience participation so I think they’re more scared of me pulling them onstage then yelling stuff out.I emceed a big Theatresports show at The University of Sydney a while ago and a jazz band was double booked for the night. There were over four hundred students there for Theatresports so they clearly got bumped from the night. The band then decided it’d be professional to get drunk and heckle.

I took matters into my own hands and used one of the guy’s heckles as a piece of stimulus that just publicly humiliated him. You’d think that was enough, but a friend of mine came up to me after the show and told me how the heckler’s girlfriend yelled at him in front of everyone and screamed “You’re not getting sex for a week!” and then walked out. I shit you not!

If you could have a BBQ with any 3 comedians, living or not, who would they be?

In my last show I set up two sketches where I broke up an audience member (supposedly my girlfriend) and ask her to stop following me. Later in the show I got together with another audience member (my new girlfriend) and then reacted when I saw the stalker girlfriend again. I then put bikinis on them and get them to have a pillow fight. In this show however, they just went for it. They started pulling each other’s hair and calling each other ‘bitch’. I was scared, purely from an insurance stance I wasn’t sure I was covered.

I’d like to think I’m a cross between Sydney and Melbourne. I’m pretty relaxed and easy going but I do like some tasty, tasty food.

For details and tickets, visit the Soho Theatre website