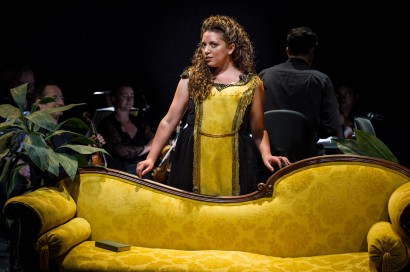 IT CAN be safely assumed that not many young female opera singers harbour a conscious desire to interpret the role of a Portuguese yellow sofa. Mozart’s Queen of the Night, perhaps. La Boheme’s Mimi, almost definitely. But not garish Iberian home furniture.

But as outlandish as the idea seems, it is exactly what Australian mezzo-soprano, Lauren Easton, did with authenticity and musical virtuosity last week at London’s Royal Opera House.

Easton was one of a small band of singers and musicians who performed British composer Julian Philip’s 2009 opera The Yellow Sofa at the Opera House’s Lindbury Studio as part of the Glyndebourne Opera Tour 2012.

The 2012 Tour is currently making its way through nine UK destinations and the programming also includes operatic hits The Marriage of Figaro and Rusalka in its repertoire.

Philip’s The Yellow Sofa is based on a novel by 19th Century Portuguese literary hero Eca de Queiros. The story is perfect operatic fare; blundering lovers, misunderstandings, comic bit-players and ultimate reconciliation. In de Queiros’s tale, a drab husband returns home to find his wife in the arms of another man – in flagrant delit on his yellow sofa.

It is here that Easton, the personification of the sofa, emerges from the stage’s darkness. Dressed in matching yellow, Easton sings as both narrator and ethical conscience while the tragi-comic events whirl around her.

“It’s a few steps away from Mozart but it contains the same amount of melodrama”, Easton told Australian Times in a recent interview.

Easton makes the role enchanting, even sensual, as she moves carefully along caressing the wooden back of the sofa while relating the unhappy story of the Portuguese husband.

Perhaps an Australian childhood of watching cheesy melodrama through Neighbours and Home and Away helped give Easton the creative edge.

All the action took place on the stage of the Lindbury Studio, including the chamber ensemble of 14 musicians. Philips’ score successfully weaves contemporary techniques with indulgent and evocative traditional Portuguese folk singing, or fado.

Glyndebourne Opera, one of the biggest names in the industry and one with a strong reputation for recognising Australian musical talent, is taking its big and small productions across the UK as part of an educational mission to bring opera to a wider audience.

The 2012 Glyndebourne Tour continues until 8 December.