A contemporary theatre production currently playing at the Ovalhouse explores race relations and multiculturalism in Australia, from Captain Cook’s historic first encounter with indigenous people, through to National Sorry Day. 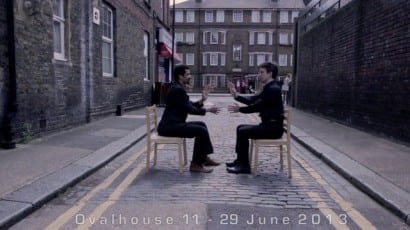 LIKE ALL good British tourists, Captain Cook returned home with a souvenir from his trip Down Under. No it was not one of those clip-on koalas or an inflatable boxing kangaroo, but a bark shield he had collected after his first encounter with indigenous Australia.

Currently taking pride of place in the Room of Enlightenment at the British Museum, the Australian bark shield is the lasting account of this meeting, which happened almost 250 years ago.

This artefact is the inspiration behind a contemporary theatre production — the aptly titled Shield — currently playing at the Ovalhouse.

Director and performer, Amaara Raheem, was inspired to develop a work from this historic item after following the BBC Radio 4 series History of the World in 100 Objects.

The Australian bark shield was number 89, and was described by historian Maria Nugent as “absent of adornment…very raw…incredibly honest and useful.”

Accordingly, this production includes no elaborate decorations or props. The set is all white and very simple; silk drapes and a circle mat. The instinctive style of movement, and the informal dialogue makes for a very organic and honest presentation.

The four cast members inhabit the space, and use a variety of art forms, including movement, new writing, film, audio recordings and live music to deliver a series of scenes and transport the audience between Australia, Sri Lanka and the UK.

“I also wanted to engage with emotional territory in performance-making, meaning I really wanted to make a piece that will move people.”

Shield is a combination of four stories about language, love, encounter and misunderstanding. The stories are intertwined, and links are drawn between Cook’s account of his first contact with Australian natives, and Raheem’s own story.

“As an immigrant to Australia, often mistaken for a native, the Australian bark shield symbolised a complex system of misunderstanding that continues today.

“I have really enjoyed and been challenged by starting to make work from an object and folding and unfolding it into my own personal narrative. Combined, they make for powerful, moving, humorous, complex storytelling.”

One of the most compelling moments in Shield is listening to a recording of Raheem’s Grandmother talking about the benefits of her family relocating to Australia.

As a black and white film of a Sri Lankan street market is projected onto a screen, Raheem translates for the audience her Grandmother’s words.

“The film is framed in a way to really envelop the audience in other places. It is there to transform the theatre and to activate your imagination. Most of it is in black and white, which creates a certain mood, a certain relationship with time and a certain ‘otherness’ to the familiar,” Raheem illustrates.

This combination of life, art and history is incredibly dynamic, and effectively provokes ideas about cultural influence and identity.

Another highlight is a personal anecdote Raheem narrates to the audience about attending National Sorry Day.

During a church ceremony held to acknowledge the day of apology, the congregation mistook Sri Lankan born Raheem as being Aboriginal.

“I was interested in dealing with difficult, complex and taboo subjects, such as indigenous race relations in Australia, with a lightness of touch.”

The absence of traditional theatrical conventions in Shield may alienate some audience members. The erratic movements can be hard to follow and interpret, and there is no clear linear structure to the storytelling.

However Raheem wanted to leave much of the work opened for the audience to interpret for themselves.

“I wanted the audience to bring their own meaning making, memories, thoughts, histories and politics to the piece. I want them to do the work.”

And following in the tradition of Captain Cook himself, “it’s up to the audience to make their own map of connection.”

Shield is playing at the Ovalhouse until 29 June. To book visit Ovalhouse.com.