Hot Aussie band Sheppard have developed markedly even in the few months since we last saw them here. 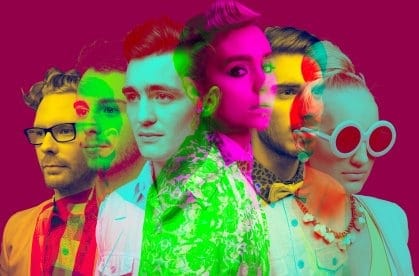 Sheppard have just stepped off stage at the Hoxton Bar in London when we speak to them.

The Aussie band is flying high from the rapturous reception that the audience have just given them in response to their energy charged set.

It tops off a heady few months for Sheppard who we interviewed when they were here for a brief visit last October. Since then they have scored their first No 1 back home in Australia with their new single, the platinum awarded Geronimo, and they’ve also signed to Decca Records here in the UK. Continued below…

Sheppard’s performance in London is part of the Aussie BBQ, an event designed to give Australian bands a platform to reach out to audiences in London, and their short pop inspired set has elicited the most enthusiastic response so far today.

Out front, George Sheppard is winding the dial up on his self-styled ‘sweatometer’ determined to drive the audience into a feel-good frenzy. George’s sister, Amy takes lead vocals on a number of the tracks giving the band a brilliant dynamic and other sister Emma shows that talent runs through the entire family with vocals and bass playing duties. Completing the line-up, co-songwriter Jay Bovino along with Michael Butler and Dean Gordon work furiously in the engine room of the band, pushing it constantly along with indie-pop power. Sheppard’s live set is one feel good moment after another.

Their 2013 hit Let Me Down Easy is enough to get the party started with many in the audience joining in on chorus and verse, but it’s when Sheppard break into the soon to be released Geronimo, that the bands indie rattle sets a fire alight amongst those present and the party really gets going.

If you missed the Aussie BBQ you’ll have another chance to catch Sheppard when they play their debut London headline show at Water Rats on Thursday 22 May.

A little time after their show and having got the band away from the venue where fans all want to talk to and meet the band, they tell us about plans for their upcoming album. It’s the product of several years of hard work and the songwriting sticks to the formula of being designed to pick the listener up and make them feel good. Whilst the band is excited for fans to hear the new material they know they can’t, and in fact are determined not to, let success go to their heads. “We’ve worked so hard for this and connecting with the fans is the thing that’s keeping us going.”

Sheppard say they are feeling a little of the wear and tear of the current schedule of constant touring but they are determined to get out and see as many of the fans who have supported them so far. They tell me that all the posting on Sheppard’s Facebook page and Instagram is done by one member of the band or another and it’s one of the ways for them to keep their feet on the ground and in touch with their fans.

What’s clear from talking to them and seeing them live is that Sheppard have developed as a band even in the few months since we last saw them here. Watching this brilliant little band reach out internationally is exciting and we can only wish them well as they take Aussie music to a world-wide audience.

The single ‘Geronimo’ will be released in the UK by Decca Records soon and Sheppard play one more London show at Water Rats on Thursday 22 May.

Get tickets to Sheppard, live @ Water Rats in London