SECRET LONDON | London is a dynamic and vibrant city, and it can sometimes be hard to make sure you have your finger on the pulse. GEORGE KATRALIS lets us in on a few of his favourite off the beaten track London haunts with Part 1 of his Top 10 Secret London list. IF I have learnt but one thing from my two years living in London it’s this; everyone has a story for what brought them here. No exceptions.

For most it’s the opportunity to travel, to see the world. For a few, it involves a broken heart. For some it’s the chance to be a completely different person in a place where nobody knows you.

For myself, it was the chance to live out an adolescent fantasy. Living in London; the city that had been romanticised beyond neurological proportions thanks largely to the music of The Beatles, the books of Nick Hornby and hearing stories from English backpackers at a very young and impressionable age.

For the most part, us Aussies are everywhere. We’re packing the museums, we’re roaming the streets and we’re doing our best to try and get into what ye English call culture, even if it means donning the customary greeting of “Alright”.

Sadly though, there is a group of us who feel the need to boycott this. You know the type. They get themselves a W12 postcode, pitch a tent at the Walkabout, live on a diet of Snakebites and don’t move until their two years is up.

To those people, fear not. I don’t judge, but, I am here to help you out. Also, if at any point in reading this you have thought to yourself “I don’t go to the Walkie, I go to Elk”, then please take a seat. This involves you too.

London can be a big dark place … but it’s within these dark corners that lie the best of what this city has to offer. London is famous for its hidden scenes. Places and things so off the beaten track that word of mouth via a friend of a friend is the only way to catch wind of such things.

Lucky for you, I am this friend and I am blowing the whistle on what I consider to be London’s Top 10 best-kept secrets. Join me won’t you?

One for the music lovers. Sofar is an underground musical movement that started here in London. Dreamt up by two friends who once attended a gig and couldn’t hear a word of the show above the overly vocal crowd. Instead of complaining, they decided to create a night for those who love the purity of music. To hear what is often missed on the big stage.

How? By placing music in the intimate setting of a pop up style gig held in someone’s living room.

This is a must for anyone who loves good music. And with the likes of festival touring bands dropping in, you never know whom you might see.

From music to film, whether a casual film goer or a seasoned film buff, this is one of the most fun cinema going experiences you will ever have. Not only do you see a film, but, without giving away too much, you sort of become part of it too.

Secret Cinema sells tickets to their customers before even announcing what film is showing, what genre to expect, or even where they are going to see it.

Armed with nothing but cryptic clues in the lead up to the night to help you pick your fancy dress attire and find your location for the event, upon arrival you are greeted by actors playing out roles from the soon to be screened film. So much fun you can’t help but get involved.

Staying on the topic of films, this little old school cinema situated in the back streets of Leicester Square is a throw back to the cinema going experience we all remember from our childhood.

Popcorn from the popper, sticky floors, non-elevated chairs so if you’re sitting behind someone tall you’re pretty much screwed. But don’t let that turn you off — The Prince is home to the classics long forgotten from the silver screen. Ever wanted to see something in the big screen but never got the chance? Well, chances are these guys will do it.

Often hosting movie marathons, double bills and dress up nights if you fancy watching a John Hughes classic, quoting Anchorman, singing along to Grease coupled with a Die Hard double feature, then you’ve found your place.

Hidden beneath the streets of Shaftsbury Avenue, this hidden cellar type café/bar is one of my personal favourite finds. It hosts an easy-going crowd who can enjoy the 40+ cocktails on offer whilst admiring the monthly rotating art exhibits that hang on the aged industrial concrete walls. People pack into this place with good reason. Get in early and enjoy the atmosphere. 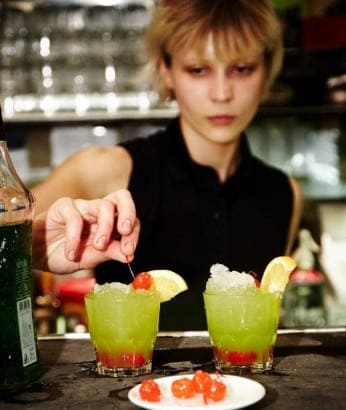 As far as London pubs go, you won’t find a better one then this. Frequented by locals, and on a warm summers day quite literally bursting at the seams, this old school nautical themed bar is hidden along the Thames beneath the beautiful Hammersmith Bridge.

On any given day you’ll see couples walking their dogs, or rowers charging down the river. I am almost hesitant if to share this gem with you because it has fast become my favourite get away in London. For a great atmosphere, friendly staff and a killer Chicken Parmigiana, the Blue Anchor is well worth a visit.

Well, that should be enough to get you through this week at least. I don’t want to spoil you…well, not too much.

Watch this space again next week for numbers 6-10 of my Top 10 Secret London.