Master of the Absurd, Australian comedian Sam Simmons, brings his unique, subversive and hilarious brand of comedy back to London's Soho Theatre with Shitty Trivia. Catch it while you can! 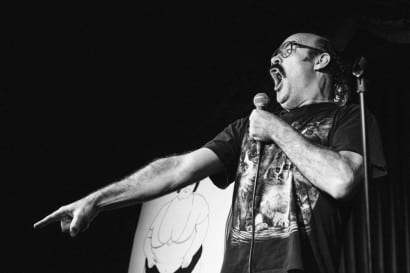 LAST time Sam Simmons came to London, I laughed so hard I almost cried. It was an hour-long subversive, absurdist roller-coaster of hilarity akin to what I imagine dropping acid on the set of a comedy sketch show would be like.

Read the review of About the Weather here

At the time I said Sam Simmons stand-up was less observational witticisms and more mad-cap performance art insanity, and the UK was unlikely to see anything like it again — at least until Simmons came back to town.

Now, a mere seven months later, and the Simmons whirlwind has returned with a new show Shitty Trivia.

For those Australians who are regular listeners of Triple J, they would be familiar with Simmons radio segment of the same name. A random, free-fall through all of life’s big questions, like “Is it wrong to feed a cat a Vienetta?”

It is a powerful and life-changing hour of questions. You’ll learn nothing, but you’ll look at the world differently.

For those who are already fans, you will delight in seeing this unique stream of consciousness brought to life on the stage. Possibly with you as an audience member included.

And for those who haven’t yet had the benefit of the Sam Simmons experience, well, prepare yourselves. You’re in for one hell of a ride.

Sam Simmons: Shitty Trivia is on at Soho Theatre until Saturday 24 August. Tickets are £10-£20 and available from sohotheatre.com.