Sam Simmons: Master of the Absurd

INTERVIEW | With his unique brand of absurdist comedy, it is likely that there will be a lot more to Sam Simmons UK stand-up show About The Weather than just the weather. Just don’t ask him what it all means… 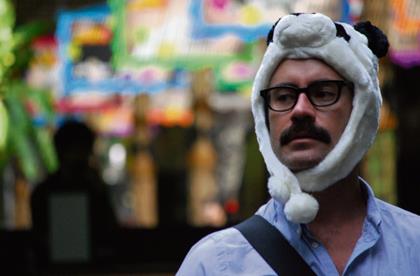 ANY Australian brought up on a diet of Triple J will be familiar, if not with the comedian Sam Simmons, then at least his ‘bit’ on drivetime radio called ‘Sh*tty Trivia’.

Emblematic of his style of comedy, ‘Sh*tty Trivia’ pushes the everyday and mundane into the realms of the nonsensical, making us laugh with the sheer illogicality and absurdity of the questions and answers, without really understanding what exactly it is we’re laughing at.

It’s typical, Sam told Australian Times, of his tendency to “come at life slightly askew”, but also his desire to have his audience work just as hard as he does. “Nothing’s fun if its easy” he says, “even if you’re a confused audience member working for a joke.”

“Is it wrong to feed a cat a Vienetta?” is one such example of Sh*tty Trivia.

The willing participant often tries to pre-empt the answer with their own unpredictable response, but how can you stay one step ahead of something that has no rules or follows no pattern?

Alternately hilarious and divisive, you may either love or hate Sam Simmons’ absurdist humour. You may think it’s ridiculous, or pure genius. Just don’t try to explain it. Like I did.

I suggested to Sam that possibly his humour draws on the absurdist philosophical movement that posits that any human effort to find value and meaning in life will ultimately fail.

“No dude” says Simmons, “I’m just having a good time.”

“It’s weird though, people take comedy very seriously and get very angry if it’s not to their taste. I wish the same applied to performance art, people just sit and applaud absolute shit sometimes.”

Having been to a Simmons show before, Meanwhile, which received rave reviews at the Edinburgh Festival, I hesitated to say that aspects of the show wouldn’t be out of place in some avant-garde minimalist glass box nouveau rich art gallery.

One such moment is when Simmons, having appeared to the audience in a spacesuit, started smashing Ol El Paso taco shells against his chest before throwing the box at the audience.

It is the joy of Simmons comedy that these moments of absolute absurdity have you both laughing hysterically, whilst also simultaneously questioning your own sanity in doing so. “What the hell am I laughing at” you ask as he lists his pinecone friends.

His new show, About the Weather, which Simmons will perform at Soho Theatre, may just earn the same reaction amongst UK audiences.

When asked what the show is about Simmons answers:

“Small talk and an ability to communicate in an increasingly connected world…funny ay?”

So basically, no clues then?

The press release is no more revealing: “A man is standing next to another man, they have nothing in common and nothing to speak of, perhaps they can talk about the weather.”

Hmmm, I may just have to go find out for myself. I’ll just remember not to ask any more questions about absurdist philosophy, lest someone throws a taco shell box at me.

About the Weather is on at Soho Theatre from Monday 3 December to Saturday 5 January. For more information and tickets go to www.sohotheatre.com.au.