Sam Simmons – About the Weather at Soho Theatre

REVIEW | Sam Simmons's show About the Weather at Soho Theatre is to stand-up what Lady Gaga is to Britney Spears style sanitized pop. The genre’s crazier, unpredictable, more theatrical cousin. 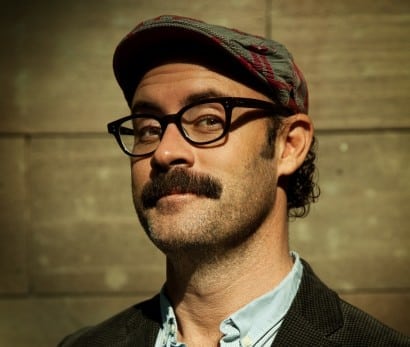 SAM Simmons is to stand-up what Lady Gaga is to Britney Spears style sanitized pop. The genre’s crazier, unpredictable, more theatrical cousin, Sam Simmons show About the Weather is less observational witticisms on bland everyday weather patterns and more mad-cap performance art insanity, complete with waving Chinese cats, a “subliminal owl” and an extended knee-licking scene that will send those afraid of audience participation running for the exits.

There is even his own version of Gaga’s meat-dress. In the midst of the bare bones of a story about the mundanity of Simmons character’s life — from his “bus crush” to his attempts to put together an IKEA coffee table — there is a unique moment that ends with Simmons draping ham slices over his face and singing The Eagle’s ‘Desperado’.

It is the genius of Simmons’ comedy, that at the time, it all seems to make sense. That there seems nothing more normal than the narrator of the story — a talking radio — forcing Simmons to devour an entire packet of dry biscuits (“faster, faster” the omnipresent voice urges) and shower the crumbs over the front row, or Simmons indulging in extended flashbacks to vintage Gillette ads.

Or even the moment where he disappears into a “cod and chips” inspired reverie that takes him to medieval Spain to meet a prostitute called “Chocolate Graham” before returning to his invisible object of affection — the “bus crush”. The words “bus crush” feature so heavily that at the sparsely populated weekday night show I attended, one attendee walked out repeating the words with all the conviction of someone who had just found his new Facebook status update.

However, Simmons absurdist subversion of the genre is not for everyone. Those expecting a traditional hour of stand-up should revise all expectations, and there was more than one confused face at the point where Simmons straddled an audience member on a swivel chair and softly spun him while hugging him tightly.

“F*ck you” Simmons tells the crowd. “I’m big in Australia”.

Nevertheless, Simmons ploughs through the possible confusion with the unflinching determination of a climate-change denier, performing with an intensity and energy that leaves him a sweating heaving mess by the end, but with a crowd entirely won over.

For an off-the-wall night at the theatre, at stand-up comedy prices, do not miss Sam Simmons at Soho Theatre. I guarantee UK will not see anything like it again, at least until Simmons brings his next show back into town.

About the Weather is showing at Soho Theatre until Saturday 5 January 2013. For information and tickets see www.sohotheatre.com.