Rural Aussie on a London stage

After swapping her stage dungarees for heels and sparkles, Once We Lived Here star Melle Stewart has a quick chat before hitting the West End.

by Alex Blackie
in Lifestyle 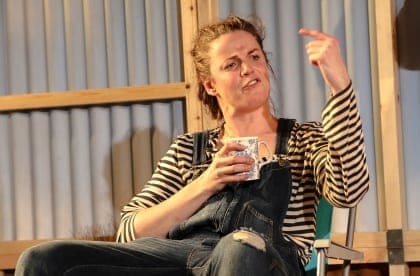 Once We Lived Here, playing at the King’s Head Theatre in Angel (London) until Saturday 26 April, is the emotionally-charged story of an Australian family struggling with its crumbling sheep-station and with its past.

Easy to follow, raw and peppered with Aussie humour, it’s a show for the reluctant musical-goer yet it also manages to delve touchingly into deep family conflict.

After seeing her on stage in her roughly scrunched up hair and dungarees, the show’s star, Queenslander and now Londoner Melle Stewart emerged from backstage looking glamorous in a black dress, heels and sparkling earrings on her way to see her husband’s closing night elsewhere. Before she did though, she took a moment to speak with Australian Times:

Do you think non-Australians can identify with Once We Lived Here?

“Yes, and in fact we recently had a farmer in the audience from Scotland whose wife had tears in her eyes as she left. Apparently, the same issues are faced by farmers over here; you just have to swap the drought for the floods.”

In what ways do you relate to Amy, your character in the play?

I was born in Queensland in a small town so I can understand the mentality. But mainly, I can identify with Amy and the family dynamics and characters. I am one of seven children which has always been fertile ground for me as an actress. It has made me very aware of the different roles of people in families.

When and why did you move to London?

I moved here with my husband [Ben Lewis] two years ago from Sydney. We came to experience this side of the world, the opportunities and to grow.

What is your favourite thing about London?

The West End. I love the fact that I can read Judi Dench or Helen Mirren’s autobiographies and the next day, I can watch them on stage.

Once We Lived Here, by Dean Bryant and Mathew Frank, is well worth a night out in Angel.

Award-winning in Australia and with a stint in New York, this true blue musical about family life on a farm is showing in the small King’s Head Theatre until Saturday 26 April, set at the back of the King’s Head pub in Angel, where we would certainly go back for a pint. Full of atmosphere, the pub manages to make work an eclectic mix of American saloon bar, English Pub and original theatre seats. Everyone inside, staff and punters, were super friendly and up for a chat and a live band greeted us after the show.

As you step into the theatre, the scene is set with sand on the ground reminding Aussie members of the audience of the Outback. We’re easily drawn into the storyline of the family brought back together around their sick mother. Amy (Melle Stewart), clad in dungarees and boots, is the eldest daughter who stayed home to try to save the farm and look after her mother, Claire (Simone Craddock). The other children come home, Shaun (Lestyn Arwel), the dope-smoking lost musician son and Lecy (Belinda Wollaston), the sexy self-centred media-type. Burke (Shaun Rennie), the stereotypical tall strapping Aussie farmhand, also joins in adding some spice to the story.

I won’t give the rest of the plot away in the hope that you’ll enjoy this night out and support Australian talent breaking onto the international stage. It offers a taste of home for the Australian audience, a journey to a distant dusty land for the British like me. My Aussie husband loved the play for its sense of nostalgia, the talk of servos and utes and also its stark reminder of issues back home – the drought and bush fires. Whatever our nationality, I think all of us can empathise with the characters’ difficulty ‘in relating to each other despite being related’.

‘Once We Lived There’ runs until Saturday April 26th at 7.15pm with a Saturday matinee at 2pm.