Rudimental announce they will kick off their tour in Australia in September before touring the UK in October 2013. 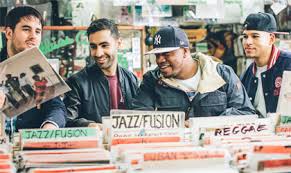 RUDIMENTAL announce they will kick off their tour in Australia in September before touring the UK in October 2013.

A Hackney based British, electronic/drum and bass band, Rudimental seem to be the king of festivals this year, playing more than 40 festival dates in 2013 alone, including Bestival in early September on the Isle of Wight. Best known for their hit singles “Feel the Love”(featuring John Newman) and “Waiting All Night”(featuring Ella Eyre), which boasts 28 million views; this group is one to watch over the next few months.

If you’ve missed the hype check out their catchy tunes here.

However, listening to this bands tracks doesn’t quite do the band justice, live the group sees around 14 people up on stage, demonstrating their skills on a mix of instruments from trumpets, guitars and even spoons.

In their live-gigs, you will also get to see a familiar face, Becky Hill from the UK’s TV show ‘The Voice’ who is currently touring with the group.

If you’re heading to any festivals this year check them out and be guaranteed an energetic performance that will have everyone bopping; or catch them back home if you’re visiting in September.

Throughout 2020, there have been vocal and highly visible protests in Thailand against the government of Prayut Chan-o-cha, who led...

Cash-strapped BA is selling off a range of china, crockery, glasses and other goodies from its cabin that it doesn’t...

The Labor party will hold its national conference “virtually”, before Easter next year, Anthony Albanese has announced.

Man was one of three Victorians who aimed to steal around $5-million from the Australia Tax Office using an elaborate...

Efforts to reduce emissions have so far only partially decarbonised the electricity generation sector. Reaching net zero will require immense...