With Roy and HG’s Russian Revolution set to dump on the Sochi Winter Olympics, it’s a good excuse to take another look at their best moments from The Dream.

by Bryce Lowry
in Entertainment, Lifestyle 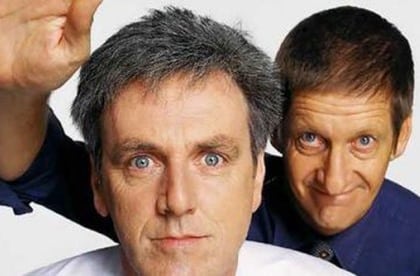 Hello boys! Roy and HG are back for another tilt, this time for the Sochi 2014 Winter Olympics. Tremendous!

The doyens of Australian sports irreverence famously ripped up the Sydney Olympics and the Athens Olympics with their cult review show The Dream as well as The Ice Dream for the Salt Lake City Winter Olympics. Roy and HG’s hilarious alternative commentary has even passed into the Aussie vernacular – ‘battered sav’, anyone?

Now, after a prolonged TV absence from the five ringed circus and pleading from fans on Facebook, the dynamic duo – John Doyle as ‘‘Rampaging’ Roy Slaven’ and Greig Pickhaver as ‘H [Harry] G Nelson’ – make their triumphant Olympics comeback for the Sochi winter games. Roy and H.G’s Russian Revolution will be shown during the Winter Olympics on Channel Ten and via the Samsung Stadium app.

On the announcement about the new show, Roy Slaven said that the Sochi 2014 Winter Olympics will be a great games for Aussie champions like Dale Begg-Smith and that he is looking forward to new stars being unearthed.

“Ten has given us a great opportunity to look closely at the new Russia and to catch up with old friends newly released from prison,” Roy added.

To get in the mood, enjoy these five top Roy and HG Olympics moments video clips from The Dream and The Ice Dream:

1) Gymnastics: The one with foreigners battering savs at the Sydney Olympics. Roy and HG calling Russian mincework as they see it. Hello boys, crazy date, spinning date, party date, flat bag and how about that fully-flung-flatbag-hello-boys! Sensational.

2) Weightlifting: On to Athens. C’mon Samson, jerk it up! It’s easy – throw a Ford ute above your head and wait for three lights. Here we have home boy Sampanis making a tilt for Helenic bronze while quack merchant and metrosexual David Beckham look-a-like Le Maosheng is guided to destiny (or not) by a Greek trumpet.

3) Ice Skating: A program put together as employees’ playtime where the participants “lay all the crap on us they can”. Roy and HG have come to the Salt Lake City Winter Olympics to be entertained and this is a ‘hot’ routine. Look out mattress, here we come!

5) Australians don’t like Americans? Aussies, Kiwis and Yanks: We’ve been in the trenches together and are even united under the ANZUS umbrella. But, according to Roy and HG, friendship comes at a cost…