The Rolling Stones have flown out of Perth Airport bound for Abu Dhabi, but will return for a tour of Australasia in October. 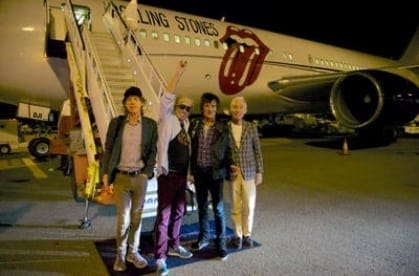 The Rolling Stones have left Australia, but will be back in October to resume the tour they postponed following the death of Mick Jagger’s girlfriend L’Wren Scott.

The band’s tongue-emblazoned private jet flew out of Perth airport just after 3pm (WST) on Thursday, bound for Abu Dhabi, but it was unclear whether Jagger was on board, with reports he left earlier this week.

The band has rallied around its frontman, while drummer Charlie Watts says Jagger is struggling to cope with the death of his partner of 13 years.

“He’s not very well. He’s not really here. It was such a shock for him.”

The band says it’s important for them to support Jagger during the “incredibly devastating and difficult time”.

“As a band we are one big family and we’ve all come together to support Mick, and will do everything we can to help him,” they said in a statement on social media on Thursday.

The 14 On Fire Tour of Australia and New Zealand was postponed following Scott’s death in New York on Monday.

The Stones were due to open their 14-show tour in Perth on Wednesday night.

Frontier Touring told ticket holders on Thursday that efforts were being made to reschedule the tour for October and November, although no dates had been confirmed.

If the new dates weren’t suitable, refunds could be secured, it said.

Fans who no longer wanted their tickets could get a refund from ticketing agencies, including fees and charges.

Postponing the tour is expected to have cost tens of million of dollars, with all crews, transport and venues placed on standby, and merchandise with dates printed on them now useless.

The English rockers arrived in Perth on Sunday night and Jagger was dining in South Perth on Monday when he reportedly learned the news about his partner.

Since then, the band has been rarely glimpsed, except Watts and guitarist Keith Richards, who dined at an Indian restaurant in Highgate on Wednesday.

Ms Scott’s sister wants to take the body to Utah so she can be buried beside her mother.

Autopsy results have confirmed the designer took her own life.

It is not the first time a Rolling Stones tour has been marred by death.

In 2006, Jagger’s 93-year-old father died from pneumonia in a British hospital while the rocker was performing in Las Vegas. – AAP

* Readers seeking support and information about suicide prevention can contact Lifeline on 13 11 14.