Robert Pattinson not just a pretty boy in The Rover

Staring Robert Pattinson and Guy Pearce and filmed in Australia, The Rover explores a dystopian world where economies have collapsed and crime is the new commodity. 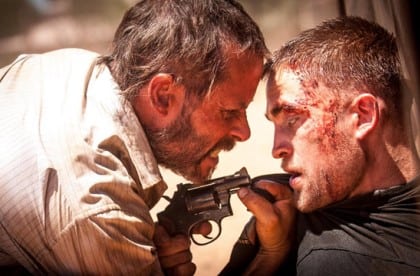 About his choice as casting Robert Pattinson in his latest film, director David MichÃ´d said; “(he is) really smart, and not the sort of pretty boy I was expecting. As soon as it was time to start testing… he was my first choice, by a long way.”

Pattinson said, “It’s very existential. It’s really interesting. I couldn’t really explain to you what it’s about but it’s sort of about how much pain can the world take and how much disgust and cruelty before love dies. I think that’s kind of what it’s about.”

Written with JoÃ«l Edgerton and directed by MichÃ´d, the plot follows Eric (Guy Pearce), a violent former Australian soldier who sets out on a hunt for a gang of dangerous criminals.  Along the journey he enlists the help of Reynolds (Pattinson), a naÃ¯ve and injured young American member of the gang, who was left behind.

Commenting on the film MichÃ´d said; “It’s like a new gold rush, where people from all corners of the world have come out to the desert to scrape out an existence. Petty criminals and miscreants and hustlers. The basic story is really quite elemental. You’ve got a really dark, dangerous, murderous person in Guy’s character, and in Rob’s character you have a quite troubled and damaged, but beautiful and naÃ¯ve, soul.”

You would not be amiss to be reminded of the classic film Mad Max.  MichÃ´d said; “You put cars in the desert in Australia and people are going to think of Mad Max, and with all due respect to that film – and I stress that – I think The Rover is going to be way more chillingly authentic and menacing.”

Australian actress Gillian Jones plays the matriarch and is joined by amateur actors from the Outback.  “You can’t meet these people and not think, Oh, there’s got be a way of getting you in this movie” said MichÃ´d.

On filming in the unforgiving Outback, producers Watts and Linde said; “The South Australian desert environment can be a tough one to work in, particularly for those coming from a Northern Hemisphere winter but both the cast and crew have thrown themselves into the shoot. We are shooting in some of the most haunting and stunning landscapes in the world, and are fortunate to have such an exceptional cast and a truly talented crew.”