With all the talk of visa problems burdening the lineup at this year’s World of Music Art and Dance (reported in The Guardian and Radio Times) it’s easy to forget what a fantastic little festival it truly is outside of the politics, now in it’s 36th successful year while countless others have fallen by the wayside.

Its biggest trump card is the sheer eclecticism of its programme, with bands and artists from more than fifty countries across the globe, covering a spectrum of musical genres which only Glastonbury could come close to matching in this writer’s opinion. More on the lineup later. Logistically, the simple gradient-free layout of the site makes it easy to get from one side to the other – no mile-long treks through claggy quagmires. The surrounding Wiltshire countryside is undulating and beautiful, and there are no interminable traffic queues congesting the entrances – entry to the car park and camping area is a breeze.

It’s a spotlessly clean affair too, with a roaming brigade of litter pickers clearing up any rubbish, while the clusters of recycling bins dotted around the site are well used. There is no gradual aesthetic degeneration through the weekend, as can happen at other, bigger festivals. There was some rain, naturally, in parts, but the rest of it basked in sunshine. The occasional downpour didn’t – couldn’t – dampen the atmosphere. The almost 40,000-strong WOMAD crowd are a typically chilled-out bunch, with plenty of young families and an older parents demographic too – most age brackets are represented. And it may sound like a hackneyed phrase but there really is something for everyone here away from the live music stages – something which definitely elevates it over other festivals which predicate on music.

There is an extensive wooded area which houses beneath its canopy a world of health and wellbeing pursuits, from professional massages to artisan tea-shops, and a wealth of other cultural options, including a live poetry arena and the ‘Taste the World’ stage – an eccentric concept in which musical artists on the bill prepare a dish distinctive to their country or region on the live cookery set-up after performing a short acoustic set of their music.

It’s not just artistic or creative pursuits on offer – science enthusiasts are also catered for by an engrossing physics tent which hold talks and activities, like a virtual-reality presentation of the the SERN supercollider in Switzerland which made for an absorbing interlude. I also enjoyed playing a theremin for the first time in one of the side-tents, which as a musician myself I’m glad to have ticked off the life list. Anyone with children in tow will probably find WOMAD to be unsurpassable among festivals on the kids’ entertainment front, including fairground attractions both generations can enjoy, while foodies with international tastes unsurprisingly have a whole world of cuisines to choose from beyond the usual burgers and butties, from authentic Goan fish curries to Mongolian barbecues.

Which leads perfectly onto WOMAD’s true raison d’etre – a celebration of the world music scene, showcasing the sounds and rhythms of more than fifty countries, incorporating a select few of Britain’s own homegrown artists, which this year included indie darlings Django Django and electronic pioneers Leftfield, who drew a mammoth crowd on the Friday night performing their seminal 1995 album ‘Leftism’. Among the myriad acts I was able to catch over the course of the weekend, my personal highlights include the dub riddims and stage banter of reggae legend Macka B, the infectious Indian beats of the Bollywood Brass Orchestra, and the tight jazzy grooves of Ezra Collective, a tour de force of musical virtuosity if a little self-indulgent in parts.

A shout-out also to a few of the smaller-stage acts who duly delivered sans the voluminous crowds of the bigger tents (Orchestre Les Mangelepa I’m looking at you). 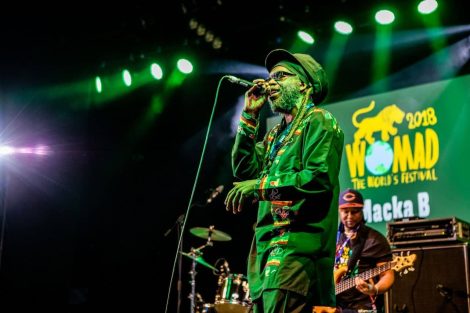 The only minor criticisms of the festival I could think of on reflection would firstly be a lack of audience performance opportunities by way of a (non poetry) open mic stage or maybe an alternative karaoke concept like Hip Hop Karaoke which drew thousands of punters at last year’s Wilderness Festival, a close cousin to WOMAD on the festival circuit. Also some form of live theatre would have been a welcome addition to the mix, as seen at Latitude Festival in Suffolk for example..

And on the all-important beverage front, while wowed by the range of real ales served straight from the barrel as they should be, and at reasonable prices to boot, I was disappointed by the fact that you weren’t allowed a sip of anything to try before buying, as is the standard practice in pubs across the nation, so if you didn’t like the particular beer you plumped for: hard cheese. A pre-sip is surely not too much to ask.

These niggles aside, I don’t think WOMAD can be topped for the sheer breadth and diversity of its music and entertainment options, and all without the intrusive corporate branding that can visually mar other festivals. It has truly nailed its modus operandi in terms of vibe and atmosphere, which has seen its brand branch out into other continents, with successful alternative incarnations in Chile and New Zealand to name a couple. 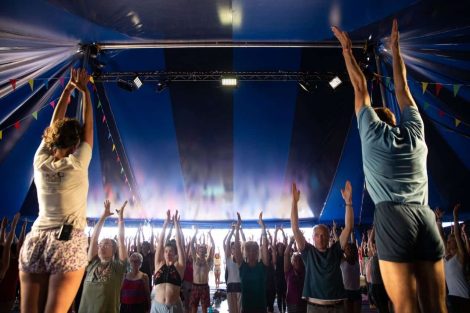 But this flagship UK event is the one to visit if you live anywhere in the British Isles, offering a memorable coming together of artists and arts lovers from across the planet, which not even inclement weather can spoil.

One can only hope that the incumbent government desists in its current attempts to throw a bureaucratic spanner into the works. It’s nothing less than this homegrown festival success story deserves.