REVIEW | What to expect from Expectations

REVIEW | Written by Emma Deakin, and presented by Shaky Isles Theatre, Expectations is a game show where couples compete for life's biggest prize. It is currently playing at the Pleasance Theatre in Islington. 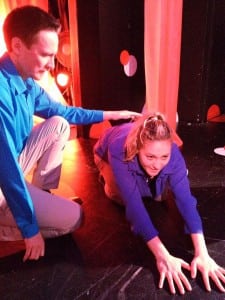 THE play begins with a raffle. You sit, stubs in hand, waiting for the draw. Hoping for the right result, but in the back of your mind knowing the chances of winning are slim. The number is called. The disappointment escalates as you watch someone else claim the prize; what could have been yours.

In today’s modern society conceiving a child can sometimes feel like entering a raffle. To increase your chances you can invest in treatments, or purchase more tickets. But there is no certainty in the result. There will always be pregnant women, as there will always be raffle winners. But for those who miss out on the big prize, it can feel like punishment.

Presented by Shaky Isles, a New Zealand theatre company in London Expectations is a new play about miscarriage and infertility. It is a based around a game show, a unique context given the sensitive subject matter, yet the parallels are clear and delicately expressed. This is not a parody, but rather an exploration of the balance between chance and choice, and the way they can influence life and happiness.

In ancient Greek mythology it was the Gods who decided one’s fate. Fittingly the hosts of the game show – Carrie (Amie Taylor) and Troy (John Fitzpatrick) — resemble god like figures, complete with Grecian dress and armour. They behave with the same mischievousness and disdain synonymous with the Gods.

The teams compete against each other in different rounds; charades, Pictionary, name that song, and a quiz. Between the rounds the audience gets an insight into lives of the contestants. 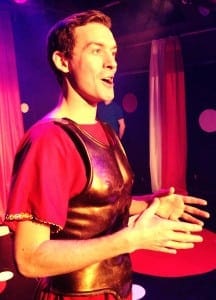 Richard and Amanda depict the familiar story of a married couple, struggling to conceive a child. There is a nice and natural chemistry between the two, as they try to sustain a happy and fulfilled life, despite missing out on the one thing they want the most.

After falling pregnant unexpectedly, Scarlett suffers some complications, which raises doubts about whether or not she wants a baby. With the support of Paul, her good friend and housemate she faces the tough decisions.

This is writer Emma Deakin’s first play. Though highly creative in its concept, at times the structure and sequence feel a bit confused. The game show rounds tend to drag. And there is one early scene where both Amanda and Scarlett appear to be in labour, which creates a slight disconnect from what follows.

The strongest sections are during the medical consultations, where the Greek God’s act as ‘doctor’ for Amanda and Scarlett. The dialogue here is very sophisticated, and nicely staged; with all performers facing the audience to deliver the lines. There is a seriousness and realism to these scenes, providing a nice balance against the rest of the play which is more of a fantasy.

Directed by Stella Duffy Expectations is a contemporary take on the subject of pregnancy. The show has a nice spirit about it, with a positive message of accepting what is, rather than fighting for, or expecting what is not.

Australian Times have a special ticket offer for you to see Expectations.