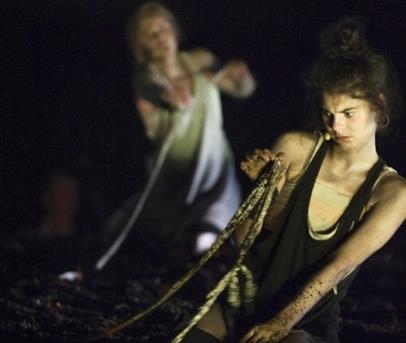 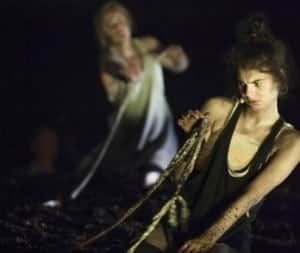 Celebrating its UK premiere, The Wasp Factory is part of The Royal Opera’s current season in the Linbury Studio Theatre featuring contemporary operas.

The opera, like the book on which it is based by Ian Banks, could be easily and artlessly reduced to the tale of a child serial killer. Be warned – dogs and little girls called Esmeralda do not fare well in this tale.

It is through Ben Frost’s music that he presents the gruesomeness and the psychological intricacies of the principal character, Frank Cauldhame.

The Icelandic string quintet, the three vocalists and the overbearing electronic timbres create a complex texture that, while occasionally making the story hard to follow, cannot be faulted for the insistently terrifying atmosphere.

From the work’s bracing opening wall of sound, which sounds like you are standing next to a Boeing 787 Dreamliner, the audience is deliberately uncomfortable. One audience member reached for earplugs.

The well-controlled and sharply rhythmic playing of the string quintet is equally effective, alternating between dulled, pulsating beats and sharp spiccato.

Frost, a Melbournian with a mane of blond hair that dips forward as he bows, was born in 1980. He left flat whites and ordinary summers at 25 to settle in Iceland for its fjords and equally ordinary summers.

Iceland has clearly been a source of great artistic inspiration for Frost, who regularly works with Icelandic musicians and artists from a range of other media.

The Wasp Factory is a tense opera with little respite. Although the action is more monologue than dialogue, the artistic decision to share the thoughts and roles among three youthful female singers maintains interest. This is especially true as the singers navigate their way across a glass, square stage rising vertically toward the ceiling throughout the opera. The mounds of dirt, from which the singers emerge unexpectedly in the opening scene, slowly fall to the floor.

The singers are excellent. Their diverse backgrounds — from Renaissance to blues and jazz to classical training — add yet more diversity to the score. Sometimes the child murder can sound like a new Amy Winehouse. Other times you are sure that a Sarah Brightman-like soprano is riffing, “My greatest enemies are women and the sea.”

The Wasp Factory in on at Linbury Studio Theatre  until 8 October. To purchase tickets, click here.