Review | Merrily We Roll Along, on a roll

REVIEW | Following a sell out season at the Menier Chocolate Factory, it is easy to see why Merrily We Roll Along is back by popular demand, this time playing at the Harold Pinter Theatre. 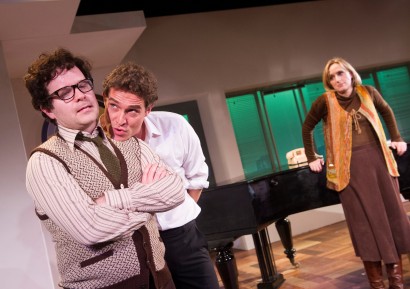 Damian Humbley, Mark Umbers and Jenna Russell in Merrily We Roll Along

IT HAS been days since I saw the show, but the title tune is still in my head. Unsurprising, given the cast reprise it on seven separate occasions. I admit, that sounds annoying. But when a show is as good as Merrily We Roll Along, it’s kind of forgivable.

On paper the story would seem rather two-dimensional; from humble beginnings, three talented friends with big dreams work together to make them a reality. Following a big break, and success after success their dreams fade and their friendships are tested.

When told in reverse, this story becomes something unlike anything else. Add some great tunes by Stephen Sondheim, and smart direction by Maria Freidman, and this is one compelling piece of theatre.

From the opening scene, which is incredibly strong, you can tell that this show is effective because of its refined approach. Unlike other musicals, which seduce an audience with elaborate costumes, sets, choreography and special effects, Merrily’s strength is in its honest portrayal of these real characters and real stories.

When you limit the number of performance elements, the audience can focus more on the words, the story, the performances, and the songs — hence why I can’t get that one out of my head.

This show doesn’t feel like it is trying too hard, which makes it a pleasure to watch. Perhaps this is why the start of the second act — arguably the weakest part of the show — feels a bit out of place. You almost feel as though a dance sequence was included just to give the choreographer something to do. However once the show returns to its more authentic style, it gets better — particularly with scenes like “Opening doors” and “Bobby and Jacki and Jack”. And the finale is very moving, showing the audience the starting point of the as yet untainted friendship.

The performances of the three friends are great. Mark Umbers makes a highly unlikable Franklin Shepard, although slightly more likable with each rewinding scene.

Jenna Russell, who plays Mary Flyn, is a delight to watch. From the start, she is the one I looked forward to seeing as the story rolled along. She’s funny, endearing and honest.

Damian Humbly, an Australian performer, is brilliant as Charley Kringas. His number “Franklin Shepard Inc” is a highlight of the show.

Read our interview with Damian Humbly

Merrily We Roll Along is entertaining, moving and a breath of fresh theatre.