REVIEW | Happy New at Trafalgar Studios, by Australian playwright Brendan Cowell, is full of raw emotion and an undertone of restless aggression. It is a brutal exploration of how humans operate in modern Australian society, that sucks in the audience by virtue of proximity and off the back of some strong performances from a talented cast. 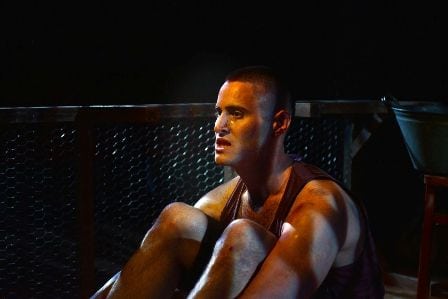 THE ROLE of theatre as a mode of social commentary is a concept that is often forgotten amidst the flashing lights and choreographed dance routines of the West End. It is an art-form that is designed to be provocative. A trip to the theatre should leave you considering the very nature of humanity, and the ties that bind us together as a society. Multi-award winning playwright Brendan Cowell’s Happy New poses the question in a slightly more esoteric manner: if human beings are like chickens, what is the pecking order?

Cowell wrote Happy New around a decade ago in his second foray into the world of theatre. He told Australian Times that it was somewhat strange seeing it come to the stage in London so long after it had been written. He said that Happy New was less subtle than his more recent work, full of raw emotion and an undertone of restless aggression. He was right: Happy New is a brutally honest exploration of how humans operate in modern Australian society, and what happens when trauma makes us question whether ‘normal’ even exists.

Happy New is the story of brothers Lyle and Danny, who became media darlings after they were rescued from a chicken coop as children following months of being locked in by their mother. Just as quickly as Australia falls in love with the boys, they are tossed aside by the media machine and left with only current affairs journalist (and Danny’s erstwhile girlfriend) Pru for support. The play is set on New Year’s Eve, with the brothers facing eviction from the security of their apartment and being forced to face the real world.

Trafalgar Studios, situated on Whitehall, offers an intimate encounter that sucks the audience into the play by virtue of proximity alone. The relatively small theatre has a major role in creating a connection between the audience and the characters on stage: we feel the same sense of claustrophobia that brothers Lyle and Danny would have felt after being trapped inside a chicken coop as children.

The first act of Happy New spends a considerable amount of time establishing the relationship between Lyle and Danny, with each of the men delivering rapid-paced monologues expressing their anxieties and the closeness of their relationship. Throughout the first act, there is an almost Hitchcockian sense of dread that develops: you can sense that something terrible is lurking just around the corner with every line of witty dialogue.

Sure enough, the culmination of the first act proves that audience was right to have this feeling of impending doom. Unlike the exposition-laden first act, the second act is a maelstrom of frenetic chaos that leaves the audience breathless. One of Happy New’s highlights can be found in the second act, when the apartment set transforms into the chicken coop that gave birth to the brothers’ neuroses, with actors Joel Samuels and William Troughton haunting in their portrayal of the brothers’ descent into madness.

Although Troughton and actress Lisa Dillon deliver flawless performances as Danny and Pru, the night truly belongs to Samuels in his portrayal of simple-minded younger brother Lyle. His exploration of the conflict between Lyle’s inherent weakness and his unbridled rage is one of the most engaging aspects of the entire play. Samuels switches effortlessly between depicting Lyle as an affable simpleton and a terrifying aggressor, at times leaving the audience wondering whether the character is at the top or the bottom of the social pecking order. Samuels is responsible for both the biggest laughs of the evening and the most cringe-worthy moments, given the chance to showcase his range throughout the two hour performance.

Happy New is a quintessentially Australian play, from the signed picture of John Farnham on the wall to the overuse of certain four-lettered words. Cowell captures the essence of Australian society and uses it masterfully to examine characters that have been chewed up and spat out by modern society. It is surely one of the rawest and most confronting plays currently showing on the West End, and is a must-see for theatre-goers looking for a stripped-down exploration of Australian society and those that are forced into it kicking and screaming.

Happy New is on at Trafalgar Studio from 4 — 29 June. Tickets are available through www.atgtickets.com.

Optimising your site is absolutely essential today. Not sure why? Statistics suggest that organic search still garners about 51% of...

There are a lot of indicators and signals used in trading. One of the widely known and used indicators is...

A lawyer, Navalny became a prominent regime critic a decade ago, when he created the Anti-Corruption Foundation and ran for...

We are living through an age of untold suffering. Over 500,000 people have died from coronavirus in the US alone,...