REVIEW | The eruption of applause that met the famous lines everybody was waiting for fully captured the crowd’s glee for the hit stage performance of Dirty Dancing last night. ‘Nobody puts Baby in the corner.’ 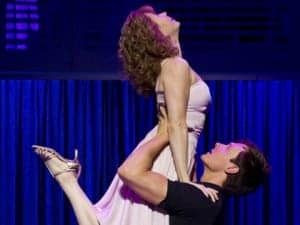 ‘NOBODY puts Baby in the corner.’

The eruption of applause that met the famous lines everybody was waiting for fully captured the crowd’s glee for the hit stage performance of Dirty Dancing last night. And with that, everybody’s favourite 80s film is back in the West End and taking London by a storm.

The exceptional theatre adaptation, which originally began in Sydney in 2004, has since become an international sensation, raking in millions and breaking box office records everywhere it went. Now the show is back in London for the second time, after a five-year stint at the Aldwych Theatre.

The pace was incredibly fluid. Dirty Dancing seamlessly ran through each scene with spots of humour that carried the plotline forward. The show stayed loyal to the film, each famous line met with wild cheers from the crowd.

Most notably, the show featured the best attempt of an under-water scene on stage. The memorable scene in the film, where Johnny and Baby are practicing lifts in a lake, managed to have the crowd in fits of laughter as the two actors — fully clothed – pretended to be splashing about behind a computer generated screen of the ocean. As silly as that might seem, it got the point across without saturating the stars of the show and causing a health and safety field day.

The characters have been casted perfectly. Jill Winternitz, who plays Baby Houseman, has managed to capture her perfectly underwhelming personality. Though this may have been her demise. Baby’s faint and caring personality throughout the show played true to the original, but meant that Jill mightn’t have received the attention she deserved.  The catchphrase ‘I carried a watermelon’ wasn’t treated with the same ecstatic rupture as other character’s memorable quotes.

Paul-Michael Jones, who plays rebellious and sexy Johnny Castle, not only looks like Patrick Swazye, but can also dance well enough to make anybody swoon.

But the real crowd-pleaser was Penny Johnson, played by Charlotte Gooch who received the loudest cheers from the crowd after each incredible move. Gooch has an incredible range of experience behind her, and it shows in the way that she commands attention on the stage. This is her second time playing Penny in London making her a veteran of the West End and the true star of the show.

Every good West End show is met with a standing ovation at its end. Dirty Dancing received all this and more. The show executed the film’s coming-of-age themes exceptionally and stayed true to the story we all love.

All in all, we cried, we laughed, we sang along and had the time of our lives.  Dirty Dancing is back in London with its pulse-raising dance moves and exceptional soundtrack. With prices starting at £26.50, this summertime classic is well worth seeing.

As is typical for a “next-generation” launch, both consoles sport significant boosts to computing power, support 4K graphics and offer...

Payroll tax reform and extended rent relief for small and midsize business tenants will give NSW retailers a solid springboard...

The pandemic has seriously altered how we work. According to statistics published by the International Labour Organization (ILO) in September...