Australian TV and film buff PAUL O'HANLON pays trubute to the life, times and influence of the greatest name in Australian television, Reg Grundy, who died this month.

It was a despondent day down under when the creator of so many famous Australian TV series Reginald Roy “Reg” Grundy died earlier this month.

Reg created a vast array of series and game shows including `The Young Doctors` `Prisoner` (called `Prisoner Cell Block H` in Britain), `Neighbours`, `Sons and Daughters` and so many more.

The combined number of episodes of those four series alone runs to more than 10,000 which have given a lot of employment to a lot of Aussie actors. To that, add the nearly 6,000 episodes of `Shortland Street` and all his other shows.

The striking thing about Reg Grundy’s life and his achievements was their longevity – 20,000 episodes, a fortune of AUD$809 million and a life span of 92 years.

Reg Grundy was born in Sydney in 1923, the only child of Roy, manager of Ernest Hillier’s chocolate shops in the city, and his wife, Lillian (nee Lees), a cashier for the company. When the Depression caused the business to relocate to Melbourne, Grundy’s father left and moved the family to Adelaide.

At 16, after attending Adelaide High School and St Peter’s college, Grundy took a job in Sydney at the David Jones department store and soon became a junior clothes designer; his employers enrolled him part-time at the Julian Ashton art school.

He joined the Australian army for wartime service in 1941 in the 1st Cavalry Division and rose to the rank of sergeant. Stationed in his homeland, he acted, sang and did comedy monologues in lunchtime concerts, before being demobbed in 1946.

He moved to Sydney in 1952 to work as a sports presenter and commentator – taking the microphone for the 1956 Melbourne Olympics four years later – and sold advertising time to supplement his income. This led him to create new shows, including the one that changed his career, ‘Wheel of Fortune’. He took it to the Sydney television channel TCN 9 in 1959, when he founded Reg Grundy Enterprises. In his early years he was well-known for his game shows. He established a relationship with the American game show producers Mark Goodson and Bill Todman and bought licences for Australian versions of their programmes including ‘Say When’ (1962-64, revived as ‘Spending Spree’, 1971-76) and ‘The Price Is Right’ (1973-74, 1981-2005).

Reg Grundy’s first really big hit was `The Young Doctors` (1976-83), about romances among the staff of the fictional Albert Memorial Hospital. It became the first Australian serial to be sold internationally.

Grundy set up offices around the world and his empire stretched to Europe and Asia, as well as North and South America. In Britain, his company produced the game shows `Going for Gold` (1987-96) and, from 1999 to 2001, `Blankety Blank`. The BBC had run the latter, based on Grundy’s Australian show `Blankety Blanks`, from 1979 until 1999.

Grundy had homes in Sydney, Bermuda and Los Angeles by the time he sold his business in 1995 to Pearson Television for AUD$320 million, which has since been rebranded as Fremantle Media.

In retirement, Reg enjoyed taking photographs of animals in the wild. He mounted various exhibitions and published a book of images, Mother and Child: Wildlife Photography (2015). His autobiography ‘Reg Grundy’ appeared in 2011.

Before his death his wealth was estimated at AUD$809 million. 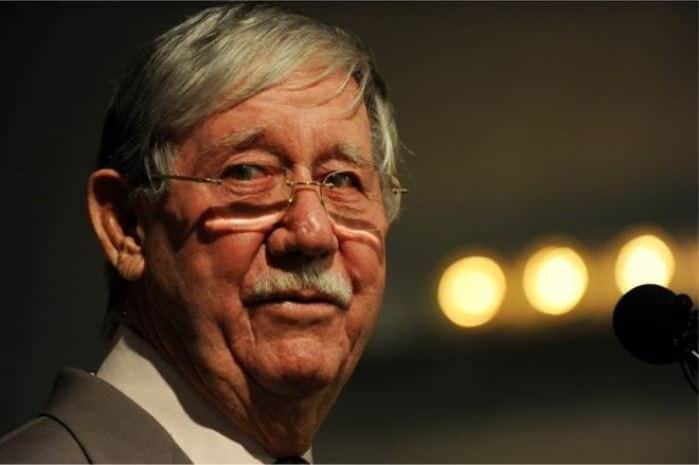 Joy Chambers Grundy, his wife of 45 years, acted in several of his soaps including `Neighbours` but for the last 30 years they resided mostly on Bermuda.

In 1983 Grundy was awarded an OBE and in 2008 was made a companion of the Order of Australia.

`Neighbours` is by far Grundy’s most successful soap. As at May 25th 2016 the Melbourne based drama has clocked up an amazing 7,373 episodes. It has been sold to more than 60 countries and if anything is more popular in Britain than it is in Australia.

‘Neighbours’ commanded British audiences of over 20 million in the early 1990’s. Since it was moved to Channel 5 after the BBC refused to stump up the £300 million over 8 years for the show, its audience share has fallen somewhat, though it is still a popular tea time programme. This year Channel 5 was allowed to broadcast episodes on the same day as Australia in order to reduce the number of viewers watching illegally online.

Still running after 31 years, the original idea of `Neighbours` was to show young people communicating with older people, which means that the cast is a mix of young actors in their teens or early 20s and older, more experienced hands.

The programme has seen a huge turnover of actors from the early days of Alan Dale who has now gone to Hollywood. Elaine Smith (Daphne) is now a drama teacher and Kylie Minogue who after two years in the show went on to be the successful singer, songwriter, author and entrepreneur we all know and love.

`Neighbours` has outlived Reg Grundy who died in Bermuda on May 6th 2016 in the arms of his wife of 45 years, Joy, and tributes came flooding in almost at once.

“His visionary ability to know how to connect Australian families through some of this country’s most loved programming has stood the test of time.

“Generations of Australians have grown up with and been touched by a Grundy Production, be it `Sons and Daughters`, `Sale of the Century`, `Prisoner`, `The Price Is Right` and hundreds of other programs.

“His innate understanding of great storytelling and entertainment lives on today through programs such as `Family Feud`, `Wentworth` and `Neighbours`.

“Reg is an icon and he will be sorely missed. Our thoughts and prayers are with Joy and family at this difficult time.”

Australian TV producer and comedian Andrew Denton said Grundy “not only spun the wheel and played on for the car – he won all the cars.”

Actress Jackie Woodburne, still working on Grundy productions `Neighbours`, and previously `Prisoner`, stated that: “Reg was a true groundbreaker in Australian television in the 70s and 80s, and beyond in light entertainment and drama.”

What was the secret of Reg Grundy’s success? One indication is the staying power of the series he was involved with.

I well remember Australian TV series of the 1970’s such as `Boney` starring James Laurenson as the titular character only ran to 26 episodes while `The Outsiders` which was a joint Australian/German production starring Andrew Keir and Sascha Hehn merely lasted for 13 episodes. The Outsiders was not well received in either Australia or Britain but proved popular in Germany (then West Germany) where it got many people interested in Oz.

Police Drama `Bluey` made by Crawford Productions ran for 39 episodes in 1976-1977 featuring Gerda Nicolson and Terry Gill both of whom would go on to have long runs in `Prisoner`.

Now contrast this with Reg Grundy’s `The Young Doctors` which ran for a staggering 1,396 episodes. Then there was `Prisoner` (called `Prisoner Cell Block H` in Britain to distinguish it from the Patrick McGoohan classic `The Prisoner`) running for 692 episodes between February 1979 and December 1986. `Sons and Daughters` with Pat ‘the Rat` played by award winning Rowena Lawrence clocked up 972 episodes from 1982-1987.

These series were made at a virtually impossible pace. In `The Young Doctors` there was no time for retakes, you had to get it right first time or if not then improvise. Actress Fiona Spence who played dour and by the book Officer Vera `Vinegar Tits` Bennett in `Prisoner` told how she frequently arrived in the studios in the dark and went home in the dark on the 14 or 15 hour working days.

Influence beyond the screen

Politically, Reg Grundy may have been on the right of the spectrum – a company he controlled declared it gave AUD$200,000 directly to the federal Australian Liberal Party six months before the 2013 election that swept former Prime Minister Tony Abbott to power.

His name has given a new colloquial speech term to the Australian Lexicon – `Reg Grundies` is Oz slang for undies/underpants.

Some may deride many of his productions as banal but they were undoubtedly entertaining and in a lot of cases ground-breaking.

I haven’t even touched on the dozens of other shows his company produced like ‘Chopper Squad’, ‘Embassy’, ‘Glenview High’, ‘The Other Side of Paradise’, ‘The Restless Years’, ‘Richmond Hill’, ‘Secret Valley’ and innumerable others.

I’m sure Reg is being well cared for by those young doctors (and nurses) in the other side of paradise in the sky.