Red Dog ready to give UK audiences a lick

The hit Aussie film Red Dog has just opened in the UK after making over $20 million at the Australian box office last year and being hailed as a critical and commercial success. 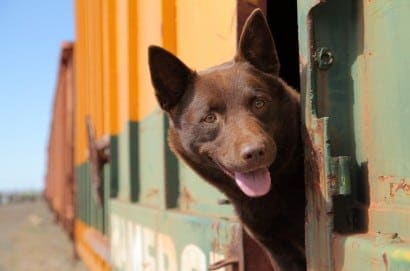 THE HIT AUSSIE film Red Dog has just opened in the UK.  After making over $20 million at the Australian box office last year and being hailed as a critical and commercial success, director Kriv Stenders is hoping UK audiences will enjoy this heart-warming flick as much as their Australian counterparts. Stenders chatted to HANNAH CARRODUS on the phone from Indonesia, to talk dogs in films, Aussie humour and “middle” America.

Story
HC: Do you think Red Dog will be well received by UK audiences?
Stenders chuckles at the question. “I bloody well hope so!” he replies down the phone.

He goes on to say that while the film played surprisingly well in Australia, it has also been very well received by American film festival audiences, indicating that the storyline is universally appealing.

If Red Dog can take out the top prize at a film festival in Indiana or as Stenders says “can’t get any more middle of America” – then he thinks the film has a good shot of resonating with UK audiences as well.

HC: Much of the humour in the film is classically Australian; do you think Brits generally enjoy Aussie humour?
“Our humour has been affiliated with the English for a long time,” Aussie boy Stenders says. He describes Australian and British humour as being like “brother and sister”, saying that both countries have a reciprocal appreciation of one another’s comedies.

So in terms of whether UK audiences will laugh at the right places, it seems Stenders is pretty confident this won’t be a problem.

HC: Red Dog depicts quite a sentimental storyline yet manages not to be corny. Was this difficult to pull off?

Stenders agrees that this was not an easy feat, yet says the fact the film was based on a true story, which had subsequently been turned into a book by writer Louis de Bernieres (author of Captain Corelli’s Mandolin), meant the cast and crew had an authentic reference point, or “compass” to guide their creative decisions.

“It’s a very old fashioned film I think,” Stenders says. “It goes back to an era when the dog doesn’t do magic tricks.”

Instead the film eloquently depicts how a loveable Kelpie managed to unite a remote mining community in Dampier, Western Australia, in the 1970s.

The story of Red Dog had become something of West Australian folklore by the time it was picked up and turned into a book, which meant that Stenders and his team had “great foundations” to work off.

Stenders has previously spoken of how while filming on location he and the crew even bumped into some of the locals who had personally encountered the charms of the real red dog.

He has said that Red Dog is essentially about the things that bring people together as a community.

HC: It’s been six months since Red Dog was released in Australia; what have you been up to in that time?

Stenders describes how he now has had a few things “on the boil” including working on commercials and two other projects, which he is noticeably hush, hush about, that he hopes will come to fruition at the end of the year. He does confirm that they are feature films.

Stenders describes his job as a “constant process of writing and hustling”.

HC:  Has the hustling become any easier now your profile has been raised by the commercial and critical success of Red Dog?

“The film industry is an unpredictable and brutal business,” he says heartily.

While Stenders does concede that “my stock has certainly improved” since Red Dog was released, he laments raising money is still a challenge and at the end of the day “getting any film made is a miracle”.

Don’t miss Red Dog in cinemas around the UK now