Recipe for fun at Garsington Opera: an Australian director and some brilliant singing

Garsington Opera's performance of L'Olimpiade at Wormsley is a musical delight and successfully comic, thanks in no small part to Australian director David Freeman. 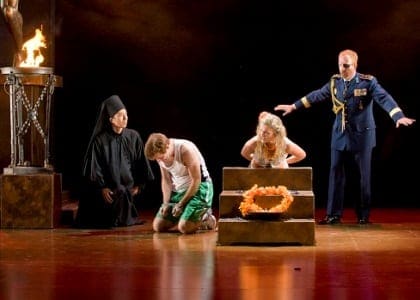 GARSINGTON Opera’s performance of L’Olimpiade is a musical delight and successfully comic, thanks in no small part to Australian director David Freeman.

It is hard to imagine a better Saturday. You don’t even have to like opera. But you will by the end of it.

In the grounds of British billionaire Mark Getty’s Wormsley estate, there’s a blue sky and the sun shines warm until well past 8pm. Cows and sheep wander grassy steppes in the close distance.

Then there is an opera on top of that.

On this particular Saturday it is Garsington Opera’s production of Antonio Vivaldi’s Olympic-themed L’Olimpiade, directed by Australian David Freeman, famous for his innovative and accessible operas.

Garsington, like other opera companies, is keen to attract London’s young professionals. It launched a special under 35s ticket programme this year.

What’s surprising is that more of them are not already here. Wormsley is only thirty minutes from London by car or an inexpensive train trip. It’s half a day’s travel in the country combined with a great night out combined with a picnic feast. What’s more, it’s fun!

Director David Freeman clearly wants the audience to enjoy themselves. Ridiculous plastic sheep are dragged wonkily across stage and the male performers are dressed in baggy Adidas and Nike tracksuits.

Members of the audience laugh constantly and without the desperate muffling that you might expect in more staid opera environments.

At Garsington, there is an air of relaxation despite even the bowties. When a helicopter flies overhead during a slow aria or when chirping birds interrupt serious discussions of State on stage, it feels more celebratory than disruptive.

Freeman even has his cast do a slow motion Olympic sprint complete with snippets of the famous melody from Chariots of Fire. In a film or play this musical reference would be trite. In an opera, however, too often preserved in its own ancientness, it is perfect. This kind of inter-textuality is what Vivaldi himself would have appreciated, the “Red Priest” being the master of reusing older material.

L’Olimpiade is an opera written for the male roles. And they are impressive at Garsington, especially Tim Mead as Licida and Emily Fons as Megacle. Mead’s cheeky red bob is as convincing as his hypnotic and slow ode to friendship.

Michael Maniaci is headshaking-in-disbelief brilliant as he trills his way through a virtuosic passage at the end of Scene Four.

Further performances of L’Olimpiade are on 14, 22 and 29 June. See: Garsingtonopera.org