Created by Australian performance company Erth, Dinosaur Zoo is an interactive show inviting audiences to get up close and personal with prehistoric creatures. It is on at Phoenix Theatre, London until 12 January. 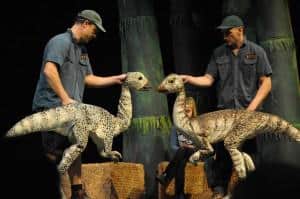 The Phoenix Theatre in London’s West End has been transformed into a wildlife sanctuary inhabited by creatures from the prehistoric world. There is nothing standing between the audience and these teeth-gnashing giants, except a couple of Australians.

“There is a kind of global attitude that Australians grow up in a country with all kinds of dangerous wildlife and are not fazed by it in anyway, so a relaxed and open attitude to animal husbandry of wild animals is very much one of the tones that carries the show,” says Dinosaur Zoo director Scott Wright.

In this unique stage show/wildlife presentation audiences are introduced to many unique and often unknown dinosaurs, including the Australovenator, a meat eating dinosaur found in Australia.

“The Australovenator was discovered in Queensland and has been nicknamed Banjo because his fossil remains were discovered close to the billabong which inspired Banjo Paterson to write Waltzing Matilda,” Wright tells Australian Times. 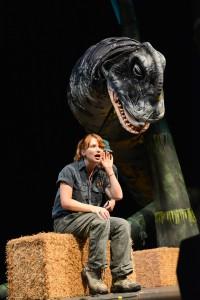 Taking audience participation to another level, this show invites children up on stage to assist the zoo keepers with their daily tasks – feeding and looking after the dinosaurs.

“Considering the potential dangers associated with dinosaurs it is somewhat reckless that we invite children to come up so close to them, (of course they are puppets and we tell our audience this from the very start of the show)” Wright says.

To create dinosaur puppets as close to the real thing, Erth consulted with palaeontologists from museums all over the world on the designs.

“It takes a long time for any of our puppets to come to life and more often than not whenever we make a new one we always go back and look at ways in which we can improve the design and engineering.”

Establish in 1990 in Ballarat, Erth has built an international reputation for inspiring audiences with their imaginative live shows and dynamic vision. However Erth was not always about giant puppetry and inflatable environments.

“For the first few years we were heavily issue-driven as both performers and activists, but it was after some time we found we had created our own style of performance and that we could explore themes that were not always about raising public awareness and so we went back to our artistic roots and began to make shows simply for the fun of it,” Wright explains.

Fast-becoming a international hit, Dinosaur Zoo has played all over the world, including Australia, Los Angeles and New York City. Though the show is aimed at children, Wright says adults have been pleasantly surprised at how much they gain from the live experience. 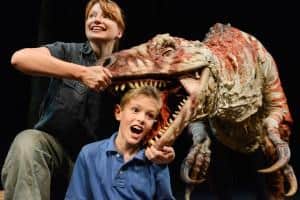 “Adults are always commenting and emailing us about how much they enjoyed the show, possibly even more than their children! This is a great response to the show as we see it as a gateway for children and adults to start a conversation and to engage with each other.”

Following its Christmas run on the West End, Dinosaur Zoo will continue to enjoy its global popularity with a three year tour of the USA commencing in January 2014, another national tour of Australia and more touring of the UK and Europe.

Dinosaur Zoo is currently playing at Phoenix Theatre until 12 January 2014. Click here for more information and to purchase tickets.