A 24-year-old man has been accused of trying to smuggle a stash of ecstasy tablets the Big Day Out on the Gold Coast. 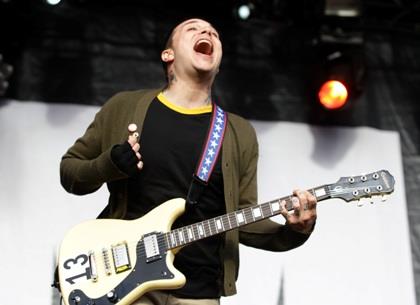 CHEMICAL REACTION: Frank Iero of My Chemical Romance at the Big Day Out on the Gold Coast on Sunday. 71 people faced drugs charges on the first Australian leg of the festival. (AAP Image/Bradley Kanaris)

A 24-year-old man has been accused of trying to smuggle a stash of ecstasy tablets into a music festival on the Gold Coast.

The man was one of 71 people charged by police at the first of five Australian Big Day Out festivals on Sunday.

Drug detection dogs were deployed at the entrances to the festival, which attracted more than 35,000 patrons to the Gold Coast Parklands.

Police said the man was found with 40 MDMA tablets and a small amount of cannabis.

He has been charged with eight counts of supplying a dangerous drug.

A total of 16 people were arrested on 28 charges at the festival, 41 patrons were handed with notices to appear and 68 liquor infringement notices were issued.

The music festival, headlined by American rapper Kanye West and 90s rockers Soundgarden, will next be held in Sydney on Thursday, before moving to Melbourne, Adelaide and Perth.

Man pretended to be a teenage social media celebrity and befriended young girls online. He then coerced them into sex...

Challenged by the Economic Society of Australia and The Conversation to rate it on a scale of A to F...