The Australian-based production of British reality television program Geordie Shore has already begun courting controversy, with police dispatched to intervene in a public disturbance at the show’s Sydney base in Coogee on the first day of filming. 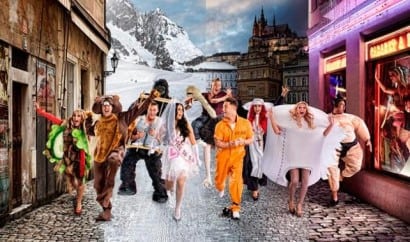 THE Australian-based production of British reality television program Geordie Shore has already begun courting controversy, with police dispatched to intervene in a public disturbance at the show’s Sydney base on the first day of filming.

New South Wales police responded to complaints from residents of the south Coogee street which will serve the cast’s home for the duration of their time in Australia. Neighbours called police on Friday night after dedicated fans of the show gathered outside the Geordie Shore house, blocking the road and obstructing local traffic.

A New South Wales police spokesperson said: “We attended the premises after a vehicle stopped outside (the house) and a group of fans got very excited.”

Producers of Geordie Shore have vowed to work more closely with police as a result of the incident, and have already hired more security to prevent the show’s fans disrupting both local residents and the filming of the program itself. The MTV show has a significant Australian fan base, with promotional tours of the country by cast members earlier in the year filling nightclubs and bars to capacity.

Cast members Vicky Pattison and Holly Hagan began their Australian adventure on Friday with afternoon drinks at Doyles in Watsons Bay, before joining their fellow cast members and the Kings Cross Hotel and nearby nightspot The Club. The group spent their Saturday night in the city at the Ivy, partying to DJs including Walden and Ben Morris at the venue’s Pacha club night.

Season six will see the departure of long-term cast member Ricci Guarnaccio and recent addition Daniel Thomas-Tuck, who will leave the programme when the fifth season concludes this week in the UK. Original cast member Jay Gardner is expected to return during the show’s Australian-based season, with the fan favourite touching down in Sydney later this month.

Cast member Gary Beadle tweeted last week: “Half way to Australia.. Chillin in Singapore…. Can’t wait to get 2 Oz and go nuts.. Buzzing for this series no arguing just a wkd time !!!”

Geordie Shore has been labelled “borderline pornographic” by British MP Chi Onwurah and has attracted criticism over the past two years for promoting violence and binge drinking. Vicky Pattison, one of the show’s original participants, was condemned by anti-alcohol campaigners last month after claiming that people should binge drink while they are young.

Pattison said: “For young people, binge drinking is a fact of life. It’s better to binge drink while you’re young, and have a laugh, and learn from your mistakes. It gives you fun, crazy memories to look back on.”