A pint with a past: Top five historical London pubs

London is a city of living history - of historic sights, famous figures and hidden stories. It is a history present in everyday life, from the streets we walk to the pubs we drink in. PAUL BLEAKLEY discovers five of London's best pubs with a past - where you can get a pint, and a history lesson. 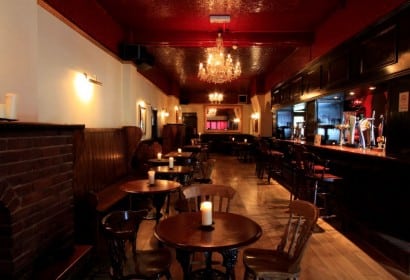 COMING from a relatively young country like Australia, it is often hard to comprehend being completely surrounded by the past while drinking in your local watering hole. British culture has traditionally revolved around the local pub for centuries, and as such many of the city’s older watering holes are crammed full of history. You could be drinking at the same table as Hemingway, or tapping your finger on a bar where 17th century pirates once spilled their ales.

Here are five historical London pubs that could tell a few salacious stories if the walls could talk:

Situated a stone’s throw from Shakespeare’s Globe Theatre and overlooking the Thames, the Anchor Bankside is one of London’s best preserved riverside pubs. The Anchor has existed in some form for over 800 years, despite being burned down in 1750 and 1876. The first of these fires occurred during the 1780 Gordon Riots, in which anti-Catholic rioters used the pub as a headquarters before razing the nearby Clink Prison to the ground. Historian and writer Samuel Pepys watched the Great Fire of London burn through the City of London in 1666 from the Anchor, and compiler of the English dictionary Samuel Johnson was an Anchor regular. The Anchor Bankside currently boasts a multilevel venue that is renowned amongst locals for its high quality fish and chips.

Another quaint riverside location, the Georgian faÃ§ade of this pub has stood the test of time and remains a favourite with the local residents of Hammersmith. You do not have to try hard to imagine 18th century poet James Thomson crafting the words to the Rule Britannia in a corner of the bar, or Ernest Hemingway brooding over a pint of bitter. Rumour has it that King Charles II used the Dove as a place to escape the restrictions of the royal court to romance his actress mistress Nell Gwynne. The Dove is in a perfect location for the annual Oxford-Cambridge Boat Race and truly shines on a summer’s day.

Situated opposite the historic Spitalfields Markets, The Ten Bells is a remnant of Victorian London and has a strong connection to the Jack the Ripper murders that plagued the East End during those brutal few months in 1888. On a dark night when Commercial Street is all but abandoned it easy to imagine the eeriness of a 19th century London ravaged by poverty, prostitution and cholera. The final canonical Ripper victim, Mary Kelly, lived a short walk from The Ten Bells and it is believed that she drank at this pub shortly before being butchered in her own home. Briefly renamed ‘The Jack the Ripper’ during the commercialisation of the 1980s, The Ten Bells ultimately returned to its original name and remains a favourite for amateur Ripperologists and those intrigued by the Victorian era in which they took place.

The Blind Beggar stands as a stalwart reflection of Cockney East London amidst the increasingly multicultural area of Tower Hamlets. The pub, built in 1894, is situated across from the Royal London Hospital, which served as home to the Elephant Man Joseph Merrick after he was rescued from a nearby ‘freak show’ on Whitechapel Road. The Blind Beggar was the location chosen for the first sermon of William Booth, who founded the Salvation Army in the bar, and was later associated with the murder of South London gangster George Cornell in 1966.

Cornell was sitting in the saloon bar of The Blind Beggar when infamous East End figure Ronnie Kray walked into the pub and shot him at close range, before casually strolling out with the assurance that fear of the Kray family would prevent any witnesses from testifying against him. The pub maintains the warm feel of an East End ‘local boozer’ and provides the opportunity to take a glimpse into the fascinating history of the area.

The Town of Ramsgate

Claiming to be the oldest pub along the riverside, The Town of Ramsgate has been a haven for privateers and pirates for over 500 years. The Town of Ramsgate was a traditional meeting point for those going to nearby Execution Dock to see the hanging of pirates including the infamous Captain Kidd in 1701. The pub is notable as the location for the arrest of ‘Hanging’ Judge George Jeffreys in 1688. The judge had become infamous for sentencing three hundred men to execution in the aftermath of a rebellion against King James II, and was arrested during the Glorious Revolution after being recognised while disguised as a sailor and attempting to flee the United Kingdom.

The pub was also the location where Captain William Bligh examined the HMS Bounty before its ill-fated voyage to Tahiti, and drank with soon-to-be mutineer Fletcher Christian at the Town of Ramsgate shortly before their departure. The Town of Ramsgate is a “local” pub that holds many of the secrets of maritime London and is waiting to be explored by anyone who dreamed of being a pirate as a child.

Where do you like to go to get a beer with a side of history? Tell us below: