Photo of the Week: A postcard from Sydney

Whilst London was shivering through the recent cold snap, Sydney was sweating through a heatwave. This photo captures Sydney Harbour on one of those 40 degree nights - sun and cocktails by the sea. 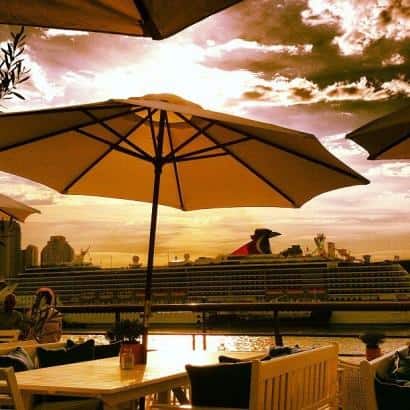 “This photo was taken at a Sydney Festival ‘pop-up’ bar. It was 7pm and still hitting 40 degrees in the midst of the heat wave that became Sydney’s third hottest day ever, and resistance was futile.

“We sat there dressed to the nines, wilting like week-old flowers and glancing longingly at the cruise ship pictured across the harbour, where tiny people dots were simultaneously enjoying a rooftop waterslide and multi-million dollar views.

“Nevertheless, utilising the menus as fans, sipping out of coconuts and flirting with attentive waiters, life was still pretty good!”

Image and words provided by an Australian reader Davina Dressler.

Email editor@australiantimes.co.uk with your photos of life in London, UK, Australia or your travels, and we could feature it as Photo of the Week.

Last time most of Australia was involved. Taken by surprise, supermarkets struggled with shoppers across the nation going into “hoard...

There's big money on the line tonight, $80 million! Here are your Powerball results for Thursday, 9 July 2020