Pedal to the metal with AC/DC’s Brian Johnson

As lead singer in AC/DC, Brian Johnson is used to dangerous, high-octane rock n roll music (not to mention the lifestyle that goes with it). But the Gateshead born 64-year-old also gets his hazardous kicks from his other love - speed racing vintage sports cars.

by Shaun Curran
in Lifestyle 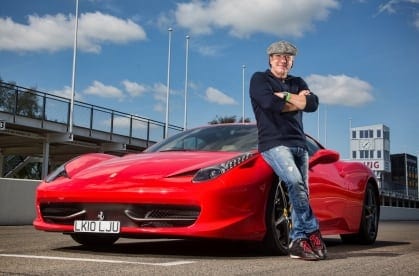 When Freeview channel Quest approached Brian Johnson to make a series, Cars That Rock, about his relationship with four wheels, he positively jumped at the chance.

“They came over to see me in Arizona and we went for coffee and the producer asked if I’d like to do a six part series on cars. I said I didn’t want to do just another car show with flames coming out of my arse, a general thing, I would like to do it about the people that build the cars, who built them in the early years, the pioneers, the vision that they had, the dreamers. These cars are still being made. I couldn’t believe they were going to let me loose on the television screen!”

They may have let him loose, but for someone whose personality comprises what you might expect from the singer of the biggest rock band in the world – extroverted, bold and very funny – it took Johnson a while to convert to TV presenter.

“I told them I was a little bit nervous about doing this. First of all, my accent is a little hard to understand in certain parts of the world. But they said, ‘Brian, you’re fine’. And once I got started it was great. I had to pick six iconic cars that I thought have had a big impact on the world and that was harder than I thought.

“Watching documentaries is one thing, but suddenly you have to do research, and think of things to say. The first thing I said about Rolls Royce, I’ll never forget. I walked down the stairs… ‘action’… (puts on very droll, boring RP voice) ‘in 1905, Charles Royce and Henry Rolls met for dinner at the Midlands Hotel in Manchester….’ ‘Er can you do that again’? Then, you suddenly realise what you need to do. They walked us through it, just let us gabble on”.

Gabbling on is something Johnson is very good at: ask him about the roots of his love of cars and expect an enthusiastic answer.

“I was interested in cars because there weren’t any in our street. Regular guys didn’t have cars. This was the early 50’s and there was petrol rationing, they were expensive. It was the same for any young kid, especially in the early 60’s, that was all getting exciting and Sterling Moss was about and the Brits were just the best. We had the best pop music with the Beatles, we had the best cars with the Mini and everybody loved Britain and wanted to be in England.”

Given his first car, a Ford Popular, by his father at 17 (“it was a horrible car, but for me it was freedom”) it wasn’t until the late 1990’s that Johnson took his love of cars up another level into speed racing. Before buying cars as renowned as Royal RP 4, Lola T70 Mark 1 and The Pillbeam, Johnson cut his racing teeth with a Cortina Mark 1. Not that his first foray went too well.

“I took it out for the first time in Road Atlanta and I crashed, 90mph, rolled over and had to get cut out. But I did get a helicopter ride to the medical centre, which was fun! But no, the rain came down and we were so unprepared. We didn’t have rain tyres, we didn’t even have a wiper on the bloody thing! A Georgia downpour is a vicious thing, we couldn’t see a thing”.

He has raced the world over ever since – “Seebring and Brans Hatch are my favourite tracks” — and finds the unmistakable thrill that he gets from putting his pedal to the metal akin to that he gets from belting out the rocking AC/DC classics in front of thousands of people.

“To me, it seems so bloody obvious. Everybody else is just getting it. The crowd, the noise, the excitement, the finish line, the end of the show – it all goes together. When there are 100,000 cheering it is such a rush. When they are cheering for you and it is a personal, special thing there is nothing that can beat that. But it comes a close second when you’re standing at the starting line with about 40 V6’s and V8’s from the 60’s and 70’s, I mean big stonking roaring gits like McLaren and Lola’s and Chevrons. And when that flag drops – oh! It’s like Zeus breaking wind – it’s just ridiculous!”

Cars that Rock with Brian Johnson airs in the UK on Thursdays at 9pm on Quest from 8th May (Freeview 38, Sky 167, Virgin Media 172)