REVIEW | The true story of a ragbag cast of convicts putting on a play in Our Country’s Good offers a unique perspective on a familiar slice of Australian history. 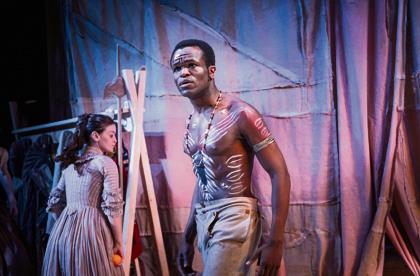 IT’S time for an admission. Before last Wednesday night, being the uncultured young man from Adelaide I am, I had never attended the theatre before.

It is not like I’ve never had the opportunity – every year Adelaide plays host to the Fringe Festival, showcasing plays and productions from all over the world. Somehow, despite this I always found myself at either one of the comedy shows, or one of the various outside bars .

Therefore, when the opportunity came up to see the play Our Country’s Good, based on the first European arrivals to Australia and their experiences, it seemed like the perfect first entre into the theatre world.

Our Country’s Good is written by Timberlake Wertenbaker and adapted from the book The Playmaker by Australian Thomas Keneally.

First brought to the stage 25 years ago at the Royal Court this ‘play within a play’ looks at the lives of the first convicts and officers who landed in Botany Bay.

The opening scene of the convicts on a ship bound for Australia sets a mood of struggle and hardship. The play cuts to Arabanoo, an Aboriginal man who watches the arrival of the Convict fleet and recites his feelings through poetry.

This technique is used throughout the play to give us an insight into how the Aborigines may have felt towards European arrivals. However, it sometimes felt contrived in the way it romanticised indigenous Australians instead of attempting to explore the decimation of the indigenous population that resulted from early European settlement.

The rest of play was done to great effect. Through the use of a simple but well crafted set and drop down curtains the audience was transported from courtrooms through to prison cells and officers tents.

All the cast performed multiple roles, including both officers and convicts, and convincingly portrayed just how hard life was for the first European arrivals to Australia. The officers as well as the convicts felt like they had been sent to a prison with no escape, and the actors captured just how imposing the landscape must have been, showing how they felt like the bush was constantly moving towards them.

The plot takes us through the endeavours of Second Lieutenant Ralph Clark to put on George Farquhar’s play The Recruiting Officer. His actors are the convicts, who range from overeager Robert Sideway convicted of stealing, to the hardnosed cockney Liz Moden. Her opening scene after the interval is one of the best of the whole performance.

The play uses comedy to great effect to break up the often overwhelmingly sombre scenes of desperation and despair, even poking fun at the audience at times. Although the audience is not left in anguish, Our Country’s Good manages to convey a sense of the brutalities of early Australian life, whilst exploring broader themes of human nature and justice.

Our Country’s Good is an excellent introduction for the uninitiated theatre-goer, and highly recommended for its insights into Australian history.

Our Country’s Good is playing at St James Theatre until 23 March 2013. Tickets are from £25 – £50 and available from www.stjamestheatre.co.uk.