Our Country’s Good and so is this play

REVIEW | There is a certain irony for a London audience watching Our Country’s Good in 2012. 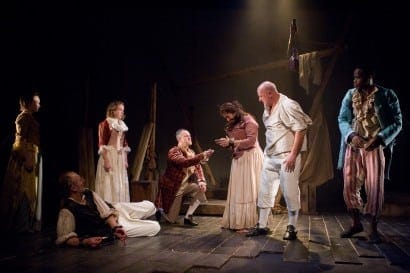 THERE is a certain irony for an audience watching Our Country’s Good in 2012.

“I’m not spending the rest of my life in this flat, brittle, burnt out country,” complains one Royal Marine in the current production of Timerberlake Wertenbaker’s 1988 play at the Rose Theatre, Kingston.  It is a play replete with British damnations of Australia, its climate and its harshness. In 1788, being sent to Australia was a fate worse than death.

Australia is, it seems by some important measures, indeed good.

Before a small house on Wednesday 1 February, the Original Theatre Company and Anvil Arts’ cast of ten working under the directorship of Alastair Whatley successfully brought to life the injustice and the lewd rambunctiousness of 18th Century penal colony Australia.

The troupe dramatises the largely true account of Governor Arthur Phillip’s project to put on a play in the nascent colony. With opposition from fellow officers and with illiterate and brow-beaten convicts, staging George Farquhar’s The Recruting Officer seems destined to fail. Instead, the convicts seize upon the artistic process, camaraderie and escapism afforded by theatre and touch again their common human dignity.

At its core, Our Country’s Good is an assertion of the ‘Art as Redeemer’ thesis. It lays it on thickly and explicitly.

In Whately’s current production, the female roles were uniformly well played. Emily Bowker, Rachel Donovan and Emma Gregory vividly embody the dramatic potency of Australia’s female convicts; the half-whore half-saint that Robert Hughes captured in The Fatal Shore.  The male roles are less engaging. The self-pleased munificence of Captain Arthur Phillip as he rhapsodises on the transformative power of theatre is wearying as is the blushing milksop Second Lieutenant Ralph Clark who directs the convict actors.

Having recently celebrated Australia Day and the very period the play recalls, Our Country’s Good is an enjoyable and sometimes moving portrayal of a landscape, a people and a period that have defined a nation over centuries. And a good nation at that.