Nicola Samer tells all about Aussie theatre in the UK

Nicola Samer, co-founder of the exciting new theatre production company IronBark, spoke to BIANCA SOLDANI about promoting the work of Australian playwrights in the UK, her experience of the London theatre scene so far and her latest undertaking, Ruben Guthrie. 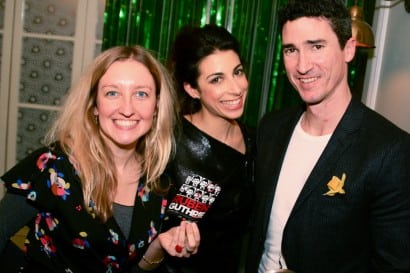 “Ruben Guthrie is a comedy about a guy trying to reconcile his world and his place within it,” Nicola told Australian Times. “He could be any one of us – he’s an individual who finds himself answerable for his relationships with alcohol, drugs and those nearest and dearest to him. He’s trying to find his voice amongst the chaos of a world in which he’s essentially an alien. But aren’t we all?”

An advocate for Australian theatrical writing, Nicola’s production company IronBark – launched in 2010 – was inspired by a desire to have the voices of talented Aussies heard in the UK.

“Although there are many theatres who program Australian work and organisations who support the international arts, there didn’t seem to be any one company whose remit focused on promoting and producing Aussie work.”

And so IronBark was born. A particularly interesting initiative the company undertakes is the “Theatre Ashes”, a creative adaptation of the infamous cricketing competition. It involves three Australian and three British playwrights who go head-to-head to create a winning 10-minute masterpiece about the others’ country.

“I think playwrights and theatre audiences respond to ideas which although are essentially interesting, also have heart and aren’t just a gimmick. I think it’s a testament to all involved that when the pieces were performed in the pouring rain at Latitude Festival there was even a sustained crowd at all!”

IronBark’s next big project is to launch an ‘Australian Theatre Festival’.

“Our aim is to create an event which will see the culmination of Australian work programmed across a centralised London venue to promote and produce plays, live work, music, readings, poetry and exhibit Art.

“A festival to celebrate the diversity of a country so far away and yet so familiar to the British public.”

Nicola comments on the unique experience of theatre in London, saying it provides a “fantastic cross section of genres and an abundance of international work”. She reveals that what she likes most about the London scene is the fact that on any given day, there is always something to see – and that it’s very accessible.

“Theatre in the UK isn’t for an elitist audience, it specifically aims to include and embrace cross-sections of the community and can cost the same as a cinema ticket.”

She also maintains that among the diverse range of rich European theatre cultures that merge in London, the Australian artistic voice has strength in its “innate purity”, facilitated by our geographical distance.

In such a hectic and animated industry, Nicola certainly keeps herself busy. She started production on Ruben Guthrie just after she completed work on a stage appropriation of the classic novel Little Women, continuing all the while, as associate director of the hugely successful West End play Lady Killers. Australian Times asked this busy former Sydney-sider how she manages to keep going.

“Vitamins? Coffee? A love of what I do? I don’t really know. I’ve always got plays in my head or [am] figuring out the next story I’d like to tell – I’m not sure I could do only one thing!”

She goes on to exclaim: “The 25 hour day would definitely [get] my vote.”

Nicola concluded by advising young Aussies still figuring out the career path that’s right for them, that it’s “essential” to do what you love.

“It’s important to be doing what you love for the right reasons.”

Ruben Guthrie will be playing from 14 to 17 March. Tickets are available via Atgtickets.com/wimbledon