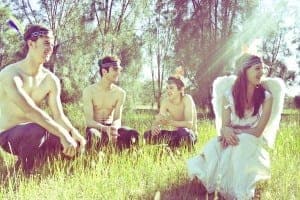 West Australian band San Cisco have stormed the stages of Australia over the past eighteen months, following the explosion of their hit single ‘Awkward’ in 2011 and their follow up LP of the same name this year. With their debut album due out in November they popped over to London for a few shows, as they initiated their pursuit of an international crowd.

Playing at The Lexington in Angel, London, San Cisco opened with ‘Golden Revolver’, before proceeding to deliver their current musical style of succinct, catchy pop tunes and finishing with crowd favourites ‘Rocket Ship and ‘Awkward.’ Their sound was tight and concise, delivered like they’d been touring their music solidly for a while, although this did become something of a problem with the gig. There was a certain element lacking which makes a live gig a step apart from whacking on a CD, with the sound at times seeming rather laboured than enjoyed by the band.

But the exception to this was some of lead singer Jordi Davieson’s stories about the history of the songs, and his crack at a leading UK music publication. With this sort of enthusiasm, combined with their great songs, a San Cisco gig has the potential to be well above what they delivered on the night. I’ll certainly be heading back to see them in the future with this hope.