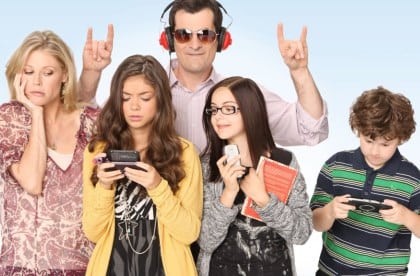 Stars of the hit show Modern Family flew in to Sydney, Australia on Tuesday for a special vacation episode.

Sofia Vergara was beaming when she greeted the fans that gathered to welcome them while her fiancé Nick Loeb, Jesse Tyler Ferguson , Nolan Gould , Ed O’Neill, Rico Rodriguez , Sarah Hyland and her boyfriend Matt Prokop all appeared keen to take in the famous Australian sights.

Producer and co-creator Steven Levitan will direct the special Australian vacation episode. He explained that they’ll definitely hit up the top Aussie tourist destinations like the Great Barrier Reef.

“We just had to go to Queensland and the Great Barrier Reef since, like Sofia Vergara, it’s one of the natural wonders of the world,” he said.

“Modern Family is a hugely popular show and it’s very exciting for our tourism industry to know that places like the Great Barrier Reef and Hayman Island will be seen by millions of people right round the world,” he enthused.

“This coup is a testament to the Government’s commitment to creating local jobs and promoting our screen and tourism industries to the world.”

But will it be as good as the Brady Bunch Hawaii special? We’ll just have to tune in.