Merrily we roll along to the West End

Winner of the Critics Circle Award for Best New Musical, the revival of Merrily We Roll Along is about to re-open, this time in the West End. Damian Humbley, an Australian musical theatre performer, is staring in the highly acclaimed show. 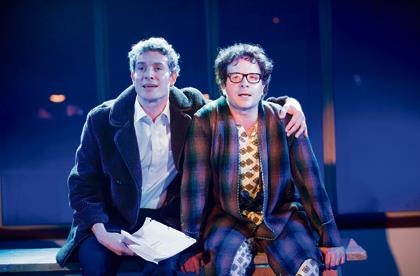 The Chocolate Factory’s production of Merrily We Roll Along was so good and so popular it’s giving audiences a generous encore; 12 weeks at the Harold Pinter Theatre in the West End. Directed by Maria Friedman and with music by Stephen Sondheim, this musical, like one of its featured songs, has got a ‘Good Thing Going’.

Australia’s own Damian Humbley, who stars in the show, attributes its popularity and ‘hit’ status to the right combination of people and performances.

“I think the reasons for its success is due to Maria’s fabulous direction, and her wonderful casting — there are so many good people in this show — and due to the score shining through. The music is so good,” he tells Australian Times.

“Great tunes like ‘Good thing going’, ‘Not a day goes by’ and ‘Old Friends’ — songs that most people would know, but don’t know they’ve come from this show.”

Humbley stars as Charlie Kringas, a lyricist who with his friends Franklin, a composer and Mary, a writer, struggle to hold onto their dreams, their artistic integrity and their friendship when Hollywood comes a knockin’.

“This show, funnily enough is one of his (Sondheim’s) most commercial scores,” says Humbley

“The irony is interesting, because the show itself is about selling out to commercialism and holding onto your dreams and the lengths of compromise, which we can all relate to.”

However this show is not your average musical.

“It is told backwards. So you start with the disintegration of the friendships and then you slowly get them back and by the end of it you’re seeing them starting out.

“It allows the audience to be in the know, as opposed to the characters on stage. You’re able to see all these dreams fade and these compromises made knowing exactly where it ends up.”

As a performer, this unique structure provides its own unique challenges, but Humbley finds the whole experience rather “liberating”.

“You can only play the stakes of the scene you’re playing in the moment.”

Spanning three decades, this show does not simply depict one point in the lives of these characters, but rather gives the audience a real insight into the highs and lows of working, and living, in the entertainment business.

“I think it’s one of those great shows, as it does what theatre and art is supposed to do in general, which is to cause reflection.

“Hopefully you leave the theatre with a positive outlook that you want to not end up like that, that you want grab hold of your dreams.”

Grabbing hold of your dreams is something Humbley is all too familiar with. Humbley moved to London in 2005, after graduating from a Musical Theatre course at the Western Australian Academy of Performing Arts (WAAPA). He has since starred in a number of shows including Lend Me a Tenor — The Musical, Fiddler on the Roof and Andrew Lloyd Weber’s Woman in White. Merrily We Roll Along marks his 5th show on the West End.

As a performer, Humbley says compared to Australia, London has more opportunities; more stage doors for him to open.

“Walk down Shaftesbury Avenue, and you’ve got more theatre there than in any capital city in Australia. Back home you either have to pick Melbourne or Sydney to live and each one had their own benefits.

“From London you can do anything you want, which is very much a good thing. You never know what to expect.”