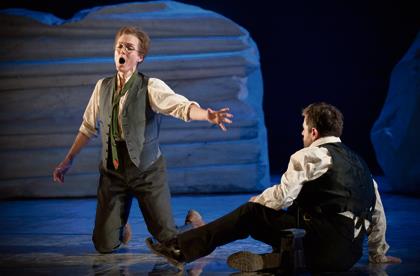 JAWS had dropped to the floor after only a few minutes of the opening night of Maometto Secondo at Garsington Opera.

The rarely-performed Italian opera by Gioachino Rossini, labelled a ‘masterwork’ following a US performance last year, demands extreme vocal versatility. And the lead singers, including Australian mezzo-soprano Caitlin Hulcup, were up to the challenge.

You could feel the packed Garsington audience will on the singers as they crafted their coloratura, rising up and down in quick succession while controlling pitch and distinguishable diction. From oldest opera diehard to the numerous ingénues, the appreciative public made their wonder felt.

Maometto Secondo is a serious work; love-torn princesses swear on their mothers’ graves and stab themselves in the stomach for the good of the nation. In the background, belligerent Turks and meek Venetian armies battle it out with terrifying sabres. But the tension provides a captivating backdrop to the music.

During the evening of 8 June and in media reviews ever since, few other Garsington singers have been as highly lauded as Hulcup. In a very convincing male bob, the former violinst with the Western Australian Symphony Orchestra, plays the role of Calbo, Princess Anna’s husband-to-be.

Hulcup’s major aria in the second act was greeted by applause so enthusiastic it was difficult to restart. Not content with one knock-out, Hulcup was also central to a wonderful trio featuring Hulcup, Princess Anna (Sian Davies) and Venetian King Paolo Erisoo (Paul Nilon).

If the musical delights were not enough, Garsington also brought good weather. Sun shone brightly through the Japanese pavilion – home to Garsington at Wormsley Estate, High Wycombe, for the past few years. It seemed that the combination of music and sylvan setting was so engrossing that few noticed the increasing chill.

In choosing a challenging and little-known opera, Garsington’s bet has well and truly paid off.

Maometto Secondo is at Garsington Opera at Wormsley until 20 July. See Garsingtonopera.org for details.