Luke McGregor is a bit of a worry

AUSSIE COMEDY | It's still a rush saying something you find funny but have never said out loud to a crowd before, then seeing how they react. 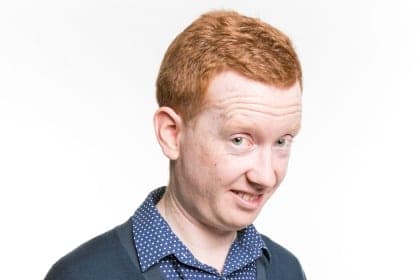 Fresh off the Edinburgh Fringe bus, Aussie rising star comedian Luke McGregor brings his brand new show and a bunch of anxieties to London’s Soho Theatre at the end of the month.

Luke McGregor has a unique and natural geeky charm that lends itself to quick wit and self deprecating humour that has rarely been captured so well.

Like all great Aussie stand up comedians before him, McGregor has featured in numerous Australian television programs including Studio A, Dirty Laundry Live, It’s a Date, and, most recently, Utopia.

His quick genius, awkward observations and apologetic demeanour are described by fellow Aussie comedians quite simply as hilarious. What he lacks in swagger he makes up for in an array of anxieties and obsessive compulsions that truly make his show, I Worry That I Worry Too Much, brilliant.

While he has already made a name for himself on the Australian circuit, McGregor is now working his way through the international stages. He has performed at Montreal’s invite only Just For Laughs Festival, he’s in the UK for his first Edinburgh Fringe this month, and you can catch him at the Soho Theatre in London next week.

I managed to fire a few questions at the worry-wart between his gigs up at the Fringe.

Did you always want to be a stand up comedian? When did you first realise that you were funny?

I was pretty weird looking growing up and used to get teased a lot at school because of it. Humour became my defence mechanism. I thought if I could make people laugh they’d be less likely to beat me up, or go a lot softer on me if they were determined to follow through with it.

I got into stand up comedy kind of by accident. My housemate entered a stand up competition back home in Tasmania. One of the contestants pulled out so I asked if I could get up. I ended up being on of the runners up and have never stopped doing it since.

What is your most awkward moment?

Probably at a gig once where I invited a date to come watch me. I did so badly that I saw her walk out halfway through – she mouthed ‘sorry’ on the way past the stage. On the plus side after I told everyone what just happened it saved the gig, so I kind of owe her one.

You have done plenty of acting throughout your career. Do you prefer acting on TV or stand up comedy?

I love stand up, but with acting you can have another crack at it if you don’t land a joke properly. That said, a good gig is always more satisfying than a good take, and you rarely get free beers on set.

I got to perform in Hong Kong recently on Melbourne Comedy Festival Roadshow, it was heaps of fun. It was probably the most nervous I’ve been but the crowd were really responsive and everyone on the tour had good gigs. I also got a photo with a gigantic statue of Bruce Lee. If I could have stolen it I would have, I would have gotten rid of my couch at TV to make room for it.

Probably a local favourite is the Spleen bar. It’s a free night where you can test out new stuff. It doesn’t always go well, but it’s still a rush saying something you find funny but have never said out loud to a crowd before, then seeing how they react. Plus it’s got a handy exit out the back if you need to leave discretely after your new stuff tanked.

Do you get many Hecklers? Do you find them annoying or a challenge?

It depends on what they throw at you. If they talk over punch lines it can spoil a joke. I had an old joke about how nowadays we put warning labels everything – I questioned if there was ever a time when everyone was drinking toilet duck (a brand of toilet cleaner) until the company thought they should put a stop to it. One lady stood up and said ‘I use toilet duck on my toilet’, then sat back down. I was stumped, I just said ‘thank you’.

What is the one daily ritual that you can’t go without?

Getting dressed. Too much hassle if you try to go out without doing it.

If you could have a BBQ with any 3 comedians, living or not, who would they be?

I guess I’d choose one that can cook/BBQ really well, regardless of their comedic skills. And the other two would be Dave Chappelle and Bill Murray.

Umm…Hobart, Tasmania? I was born there and it has a healthy oyster trade, which is one of my favourite seafoods. Dad told me growing up they taste like snot but he just didn’t want to share. He said lobsters were disgusting too which didn’t make sense because he bought one every Christmas.

Luke McGregor: I Worry That I Worry Too Much

For details and tickets, visit the Soho Theatre website

‘Well worked and sharply observed… as a comedian, he’s up there with the big guns.’

‘There are plenty of comedians with swagger out there, but at the moment McGregor has something better – honesty.’

‘Impressive delivery, relaxed but with perfect phrasing and timing… one to watch.’