Lovable funny man Jimeoin is returning to the UK this summer with a very busy touring schedule. He was kind enough to give Lesley Slade a few minutes of his time. 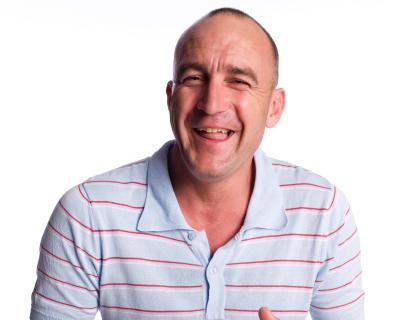 JIMEOIN is one of those brilliant success stories.  Irish labourer comes to the land down under by way of London, tries his hand at stand-up comedy and winds up as one of the most well known entertainers in the country.

Jimeoin would have to be one of Australia’s favourite adopted sons and he’s that well-known he doesn’t even need a surname.  (But if you’ve ever wondered it’s McKeown.)

After living down under for more than 20 years, Jimeoin has made such an impression on the Australian consciousness that he can never seem to escape it — no matter where he goes.

Even when travelling to far-flung places there’s usually always an Aussie ready to greet him with a “hey Jimmy!”.

Jimeoin is set to perform at the Edinburgh Fringe Festival during August and says he’s very much looking forward to it, despite a hectic schedule that includes 25 shows in 26 days.

“Edinburgh is a great place to be!  The atmosphere at the festival is amazing,” he says enthusiastically.

In May he performed at Udderbelly on London’s Southbank — a location he thoroughly enjoys too.

Jimeoin, however, hasn’t always been a fan of London.

“When I was first there I didn’t really like it — I was broke and cold.  The Irish are the toast of the town now, but back then they were considered less fashionable.  Then I came to Australia.  I suppose I was lucky that when I went back to London I could see it through Australian eyes and it changed my view.  I could appreciate the art galleries more and the history and buildings.

“I like going to Camden and West End and that walk from Tate Modern, across the bridge to St Paul’s, all the way back along to Southbank and the London Eye is great,” he says.

Despite the constant demands of being a travelling entertainer, Jimeoin seems to take it all in his stride.

But even the most popular comedians can struggle with self-doubt and anxiety.

“Sometimes I find myself in front of the mirror saying ‘you can’t f*cking do jokes — get your act together’,” he muses.  “With new shows comes pressure.  You go back to square one.  I’m sure every comic goes through it.”

When asked what he likes most about live comedy, he responds in typical Jimeoin fashion with his laconic and charming dry wit.

“I just enjoy people turning up.  I never take it for granted.  If people keep coming then I take it as a compliment, so I make a point of appreciating it.”

Whether it’s cutting it with the best of them on the world comedy stage, playing jigsaw puzzles with his three kids or discovering a love of skateboarding in his forties, Jimeoin certainly likes to mix things up in life.

“I enjoy variety,” he explains.  “I get really passionate about things and I’d hate to think that I could miss out on something.”

Jimeoin is playing Edinburgh Fringe Festival from 3 to 28 August and London on 22 October.