With Midnight Juggernauts about to launch ‘a sonic assault’ on London on 8 July, drummer Daniel Stricker catches up with ALEX BRUCE-SMITH to talk modern technology and Serge Gainsbourg. 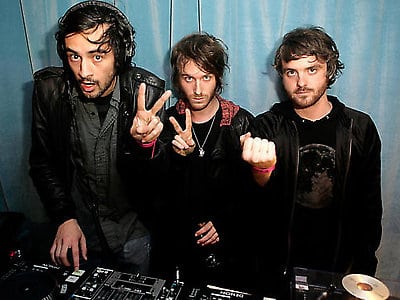 PREPARE yourselves Londoners: Midnight Juggernauts are returning to London, and they’re bringing with them an epic journey into space and time.

At least, that’s where your head will be after listening to their latest album, Uncanny Valley. The Melbourne trio that refuses to be bound by genre or expectation takes you on a psychedelic trip of interstellar harmonies and 1950s house. It’s both thoroughly modern and beautifully old school — kind of like the vintage futuristic feel of Back to the Future.

I caught up with drummer Daniel Stricker via Skype while the band were in Columbia during the South American leg of their tour. Our interview is conducted to the thrilling noises of the band’s sound check; Midnight Juggernauts are going on stage in a few hours.

“Columbia’s cool. It’s crazy,” Daniel tells me over the mash of background noises and laughter.

“You can tell there’s this crazy energy in all the people and all the places. You kind of feel like anything could happen. You could have the craziest time of your life or you could be mugged or kidnapped.”

They’ve just finished up touring with fellow home grown talent Tame Impala back in Australia. “We’ve been friends with those guys for a long time. We’ve been trying to tour with them for ages, and it just worked. We haven’t played in three years, so it was great to get back into it.”

If you’re familiar with their earlier work — Dystopia in 2007 and Crystal Axis in 2010 — you’ll get some idea of what to expect from Uncanny Valley. Daniel describes it as a middle ground between the two.

“It’s not as bombastic as the first record and not as self indulgent as the second,” he says. “It’s got elements of lots of stuff, whether it’s psychedelic music or industrial music or early house music.”

The album’s roots begun, of all places, in a church in the Noir Valley region of France (you can hear some of the sounds recorded there on the track ‘Memorium’), before being finished and mixed in Sydney and Melbourne. France definitely had an influence on the sound of this latest album.

“I was listening to a lot of French music, especially late 60s / early 70s Serge Gainsbourg,” he says. (For those who don’t know Serge Gainsbourg, he’s been described as “the dirty old man of popular music,” famous for boozing, women and scandal.)

“I was listening to a lot of early breakbeats stuff and how that was sampled in the 90s. That was the world my head was at.”

Pop music is clearly a big part of who Daniel is. “My favourite thing is pop music. I like modern production and what you can do with modern tools.”

It’s somewhat ironic then, that this new album is a statement of our fixation on technology. The Uncanny Valley is a hypothesis coined by legendary roboticist Masahiro Mori in 1970: “I have noticed that, in climbing toward the goal of making robots appear human, our affinity for them increases until we come to a valley, which I call the uncanny valley.”

Daniel is clearly not a fan of the hold technology has taken on our lives. “You walk around and there’s people on their iPhones all day, they’re not even looking at their surroundings,” he says, describing an app that will let you know if you’re about to walk in to something while looking at your phone.

Uncanny Valley might only have been made capable with new technologies, but it’s still a traditional piece of music at heart.

“There’s so many new machines and pedals and ways of doing things, but at the end of the day if you don’t have the song at the core of it, you don’t have anything, really.”

Midnight Juggernauts will be playing at Hoxton Square Bar on 8 July. Their new album Uncanny Valley is out 22 July.

When not making it, what music do you listen to?

Fuji Rock. It was like this huge, beautiful, mountainous region. It almost felt like something out of a Studio Ghibli film. A bamboo forest five kilometres long, with little stages in the woods…

One thing from home you wish you could bring on tour?

It’d be good to travel with a bathtub. That’d be really cool, just have a bath after every show. One of those bathtubs you can have outside on big legs.

Any crazy stories from being on the road?

Too many to tell!

What can Londoners expect from the show?

And maybe baguettes from Paris direct.