A comedy night for the insatiably sci-curious - stand-up mathematician Australian Matt Parker, geek songstress Helen Arney and TV experiments guy Steve Mould explore who we are and where we come from in their new show ‘Life, Oh Life’ at the Bloomsbury Theatre in London. 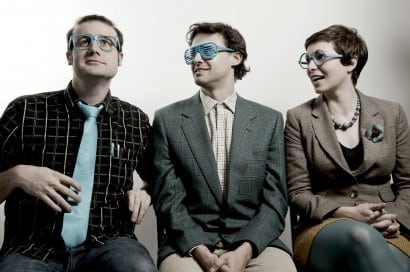 FESTIVAL of the Spoken Nerd bills itself as a comedy night for the insatiably sci-curious — mixing science, comedy, maths, music and unashamed geekery together in one interactive and highly entertaining evening. All the fun of a stand-up comedy show, but with the added bonus of stimulating brain cells you thought had long been left behind in high school biology class.

It’s an intimate, experimental gig that straddles the worlds of comedy and science, combining science experiments with songs, stand-up and interactive audience tasks in a format that has proved immensely popular across the UK.

Australian Matt Parker, the maths guy, is an award-winning comedian who has worked for the Royal Institution, the BBC and various educational bodies “to make more people more excited about maths”. With an enthusiasm that matches my Year 12 maths teacher (but with more success), Matt now writes regularly for the Guardian about all things maths, and is based in the mathematics department at Queen Mary, University of London.

Matt also appears regularly on BBC Radio4’s Infinite Monkey Cage, and will be appearing in this winter’s Discovery Channel popular science series “You Have Been Warned”, and James May’s “Things You Need To Know”.

Together, with Helen Arney and Steve Mould, they have put together a show that is not to be missed for all those who love science, or love comedy, or who are just curious to see how the two can work together.

‘Life, Oh, Life’: Festival of the Spoken Nerd is playing at Bloomsbury Theatre on 21 and 22 January 2013. Tickets are £14. See festivalofthespokennerd.com for more information.

A teaser of what you’re in for: