REVIEW | We’ve all got a chequered Australian past. But could yours destroy your life?

by Karl Mathiesen
in Lifestyle 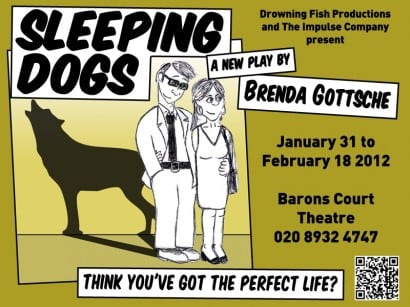 The play enters the lives of a London family just before everything falls apart. Roz (Barbara Hatwell) is a celebrity psychologist. Her husband, Australian expat Leo (Edmund Dehn) has just penned his first novel. Their son Alex (Joel Dyer) is the most levelheaded 19-year-old you could ever meet.

The household is successful in the stumbling, dysfunctional, loving way of most families. Until one day, a letter arrives with Leo’s Australian ghosts contained within. A truly bizarre secret is revealed and the family is crushed beneath the weight of Leo’s concealed past.

There are plot devices in this production that feel like a love child of Mad Men and The Truth About Cats and Dogs. However, the play is original. The reason we know that, says writer Gottsche, is because it is a true story.

“The real details were so complicated and so unbelievable that I had to tone the whole thing down,” she says with a laugh.

I found the momentum of this play a little difficult. At first it meandered as the characters slowly introduced themselves. It was evidently all too much for the girl behind me who promptly feel asleep, snored and spilled her Jagerbomb — seriously, she had a Jagerbomb in the theatre and she wasn’t even Australian.

I also thought that the ending seemed desperate to answer every question, rather than leave some things unsaid. However the guts were… well… gutsy.

As Leo’s lies started tearing apart his relationship with Roz, I was absolutely attached to the fate of these people. It was emotionally gripping theatre with the accessible human dialogue and characters that are hallmark of Australian playwriting.

The question that Roz and Leo were fighting about was whether Leo’s lies changed who he was. That is also the question, Gottsche says, that she wants the audience to ask themselves.

That is exactly what my friend and I were arguing about as we walked back to the tube.

Theatre is good. Pubs are good. So a theatre in a pub is a sure thing. Baron’s Court Theatre is in the cellar of the Curtains Up pub in the West London district. London’s pub theatre tradition is one of its best opportunities for cheap ‘kulcha’. Tickets are generally less than £15. While the quality of the onstage fare can be hit and miss, you know that there is always a bartender next door and very possibly a girl doing Jagerbombs.

Not that this was a necessary course of action at Sleeping Dogs. This was a play that offered a very human drama. The characters were sympathetic and flawed. It asked searching questions and threw in a few laughs to boot. Did I mention that there was a pub upstairs?