The perfect gift for the adventurous Australian foodie, with easy access to kangaroo brains, emu fat and Wombats, is “The English Australian Cookery Book”. 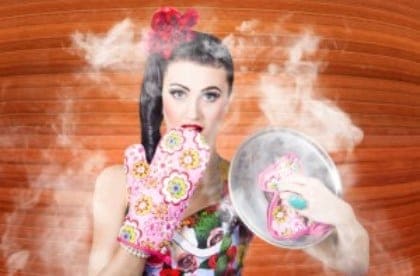 Vegetarians look away!  In case you ever wondered what to do with those darn kangaroo bits taking up fridge space next to your beef sirloin and lamb chops then fret no more.

If you make your way over to Tasmania you will find a 150-year-old recipe book making use of those ingredients you are always scratching your head about.

What is considered the first Australian cook book The English Australian Cookery Book is jam-packed full of ideas on how to cook those kangaroo tails by effortlessly popping the skin and all into the barbie ashes and voila; you have Pan Jam.  If you plan to impress your dinner party serve it up with some mushrooms gently fried in bacon fat.

Delight your guests by frying up a concoction of kangaroo brains in a wad of Emu fat (oil) — your menu should state they can expect Slippery Bob in this case.  Yumm….

The book was authored by one Mr Edward Abbott in the mid 1800’s during some financial hardship Down Under hoping the book would bring him fame and fortune.  Which brings up the unavoidable question of a current certain Mr Abbott’s ancestry…

“While Abbott was able to get the book published, it failed to generate any interest and he died soon after without the monetary gain he hoped for,” said Mr Latham who is in charge of the exhibit at the Allport Library and Museum of Fine Arts in Tasmania’s capital Hobart.

“In the early days of white colonialism in Van Diemen’s Land [now known as Tasmania], because agriculture took a lot of time to blossom — as in be sustainable. The convicts for example were out there pretty much fending for themselves and so the whole notion of eating local wildlife wouldn’t have been that uncommon,” Latham said.

Latham added that the Allport family, which bequeathed the building where the museum displaying the cookbook is based, were also pioneers of native cuisine and that the exhibition was named after a Allport family dinner favourite called ‘stuffing the porcupine’.

“They cooked an echidna and Mary Allport wrote it in her journal as ‘stuffing the porcupine’. She used a Scottish cookbook that she brought out from England with her and she described it as tasting like suckling pig,” Latham said.