A group of pranksters in New Zealand have pulled off the ultimate gag, rigging up every tap in their mate’s house to run with beer instead of water. 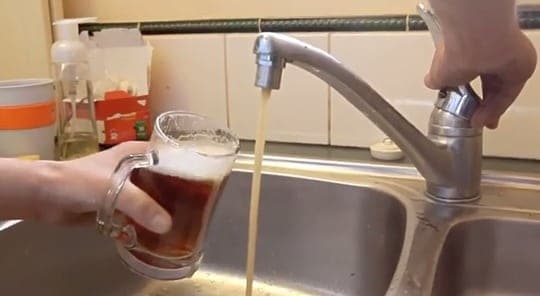 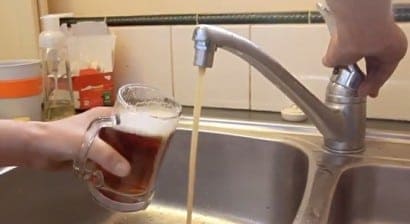 A GROUP of pranksters in New Zealand have pulled off the ultimate gag, rigging up every tap in their mate’s house to run with beer instead of water.

The video shows a group of about 15-20 men waiting for their friend Russ to leave for the day, before breaking into his house to pull off the complex prank.

A number crawl under the house with kegs of beer to hook up to the plumbing system. Others scour the house to find strategic locations for hidden cameras, including in a shoe and in the kitchen.

The gang retreat to a shed and wait for their mate and his girlfriend to return home. His confused reaction as the taps run with cold beer is captured on camera, as he tests out the various taps before stopping to take a sip of the free-flowing amber nectar.

The friends eventually let Russ in on the joke, before posting the results to YouTube. The full video has received almost 2.5 million views on the video sharing site.

Posted by ‘LittleJohnnyNZ’, he writes: “Took us all day to set up but it was worth it when the icy cool beer came pouring out”.

The complex operation conducted by the group of friends was supported by New Zealand brewing company Tui, whose logo can be seen on the kegs before they are rolled under the house.

DB’s PR company Porter Novelli said Tui Brewery had provided help with the prank, but did not give details.