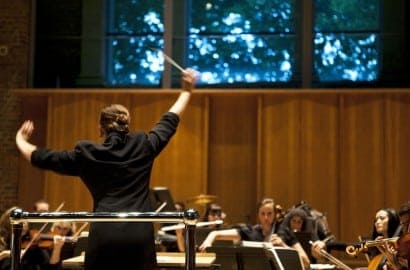 Sensual Emergency is based on the fiery 1960s manifesto from American composer and pianist Frederic Rzewski and has been reworked for the occasion by Canadian composer Matthew Ricketts.

This year’s Brighton Fringe Festival features a series of concerts and events linked to the theme of “The Musician’s Body” and devote especial attention to the life and work of Rzewski.

After an initial successful performance of Sensual Emergency in Canada, the organisers of the Brighton Fringe Festival approached Lovelady and asked her and her small team of artists to reproduce the work in “London by the Sea.”

As an improvised work, Sensual Emergency is a constantly-mutating artistic creation.

“I’ll let you know where we are at in 24 hours,” says Lovelady, calmly enjoying the sun at a West London café before further preparations in the evening.

Lovelady is best known in London for her artistic direction of all-Australian chamber orchestra Ruthless Jabiru. While only a few years old, Lovelady’s Ruthless Jabiru has already been praised following successful performances at the City of London Festival. Lovelady’s cultural contribution itself was recognised when she was presented to Her Majesty the Queen at Buckingham Palace along with other Australian cultural ambassadors in 2011.

Lovelady is excited by the  challenges presented by the opportunity to direct the improvised performance art of Sensual Emergency.

“I’m usually someone that more micro-manages,” says Lovelady, alluding to her usual role as a conductor atop a podium before scores of attentive orchestral musicians. “But in this setting it is different.”

One of the most attention-grabbing features of Sensual Emergency is that the musicians are literally bound up in tape. This striking feature is Lovelady’s visual interrogation into the true nature of musical freedom and constraint, even in the context of improvisation.

“We all have our baggage with us in some way,” explains Lovelady.

When the tape has been untangled and Lovelady has returned to London, further musical engagements await. Lovelady will be appearing with Australian guitarist John Williamson on 19 July at the City of London Festival and Ruthless Jabiru’s 2012/2013 season begins in September.