REVIEW | Offering a more up-beat set than on their last tour, the John Butler Trio rocked Brixton with melodic solos and funky renditions of fan favourites. 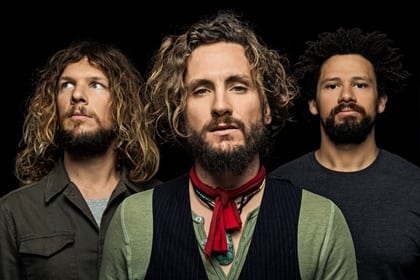 The John Butler Trio made a discreet entrance to the 02 Academy Brixton last night. Softly introducing the chords to ‘Revolution’ as the lights came up over a packed audience, building the melody and volume till dynamically bursting the chorus into the crowd.

A catchy re-worked and extended version of ‘Fire in The Sky’ followed an animated sing-along to ‘Used to Get High’.

Backed seamlessly by bassist Byron Luiters and drummer Grant Gerathy, Butler as frontman elicited an energetic response from the fans with an upbeat banjo-led prelude to ‘Only One’ and crowd-pleaser ‘Betterman’.

Taking the stage alone, Butler played an extended version of the acoustic ‘Ocean’, one of his most famous instrumentals he wrote while busking as a young musician. This has become a bit of an icon of Butler’s accomplished and dynamic fretboard skills.

‘How You Sleep at Night’ and ‘Devil Woman’ from their new album Flesh & Blood showed off the trio as a band working together with more jam-grooves than in previous, more acoustic albums.

With a sound so much more vigorous than can be captured with a studio album, you can see why JBT have released three live albums and have become a must-see Aussie act.

As an encore the trio played the infectious ‘Funky Tonight’ to a rapturous applause. Rather than losing momentum with a string of bluesy solo’s, JBT’s live performance showed off the current trio’s variety and virtuosity.