MUSIC FROM THE MOTHERLAND | Has a US yoghurt giant just gone and stolen John Butler’s song 'Zebra' for their Super Bowl commercial? Is Groovin’ the Moo the best festival in Oz? And who are Backpack Sounds? 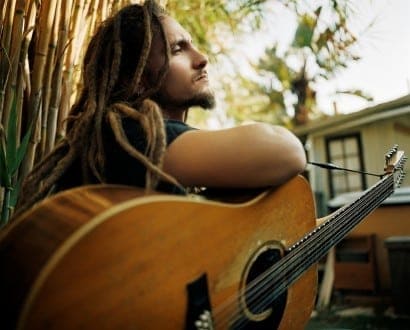 John Butler’s unofficial Super Bowl moment
Super Bowl, such a spectacular occasion! And we’re not even talking about the game. Half-time is where the real action is at. In between Madonna flipping around the stage and M.I.A flipping the bird, the highly anticipated half-time commercials are aired.

Why get so worked up about some commercials you ask? Well they’re no ordinary ads. A 30 second spot will cost a company around £3 million and the budgets for them would equal a small-budget movie.

One of the ads this year was by yoghurt brand Dannon to promote their new Greek style flavour. Keen eared Australian fans of musician John Butler noticed the similarity of the backing tune to one of his popular tunes Zebra (the ba ba bada da chorus one).

It was just as much surprise for Butler and his management who hadn’t given permission for his song to be used. Sure it might be a coincidence the writers of the ad wrote a catchy little tune without ever hearing John Butler’s version but it’s too close to be a mistake.

Butler and management are seeking legal advice over a possible plagiarism and use of his music without permission. And to make it worse, the star of the ad was former Full House star John Stamos. Not someone you might want your folk music associated with.

Watch the ad and let us know what you think – have Dannon ripped off the JBT classic? Answer in the comments section below.

Country areas taking the lead
Did you grow up in a country town? I did. Wagga Wagga to be exac,t in New South Wales. There’s a lot to be said for growing up in the country and I loved it. However one area we always lagged behind was live music. Touring bands don’t always make a beeline for these areas and heaven help you if you were underage. I remember Frenzal Rhomb playing at an underage festival when I was 15 and it being one of the best days of my life so far.

Kanye for president: the dangerous allure of the celebrity politician

Is cancel culture silencing open debate? There are risks to shutting down opinions we disagree with

So it’s with particular pride this week that we herald the Groovin’ the Moo festival lineup for 2012. With many large festivals struggling with costs and falling crowds, this touring regional festival has announced its best lineup yet. Public Enemy, The Maccabees and the Kaiser Chiefs headline the international artists and the local acts include Hilltop Hoods, 360 and Matt Corby. Unfortunately Wagga isn’t on the Moo schedule but crowds in Bunbury, Maitland, Bendigo, Canberra (okay it’s the capital but it’s still regional enough) and Townsville all get to enjoy this awesome show in their home towns. Take that city slickers!

One sure way one to beat the cold
There are plenty of tips around to stave off hypothermia and the snow this UK winter – from thermals, soups and stews to just simply staying inside. However Motherland says ‘screw that’, I’m going on holiday to where it’s sunny. And the sunny destination? Where else but the motherland?

This means I’ll be having a break from London, the tube and unfortunately you guys… But here at Motherland offices we’ve worked up a treat for you while I’m away sipping cold beer and listening to hot Australian music. Someone else is going to look after your musical needs. Someone special!

Introducing our special guests: Backpack Sounds
The reins for the next month have been handed over to the motley crew at Backpack Sounds. Who are these guys you might ask? They’re the Aussie boys in London behind a new website dedicated to promoting Australian music in the UK. They’ve got all the live Aussie gigs in UK and Europe plus new Australian music can be found at Backpacksounds.com

I won’t go into it too much because next week Nick from Backpack Sounds will give you all the good juice on the site, some Australian music tips and an insight into the guest writers they’ve gathered for Music from the Motherland. I believe the guests include musicians and industry folk who will give some insight into Australians in the UK music scene.

Hope you enjoy it; I’ve got to go pack my bag and my suncream! See you in a month! – Judgie