Joanne Hartstone and The Girl Who Jumped Off The Hollywood Sign

Look out for Aussie actress who takes on movie superstars in one woman show.

On the last day of this year’s Edinburgh Festival I was lucky enough to catch Joanne Hartstone’s final festival performance of ‘The Girl Who Jumped Off The Hollywood Sign`.

A fictional wannabe, clinging to the letter `H`, Evie looks down to the bustling LA traffic below and contemplates her life so far, its meaning and her future.

Set in the late 1940s and with music, through Evie the show explores the short and unhappy lives of film stars Jean Harlow who died at just 26 in 1937, Judy Garland who died at 47 in 1969, silent movie sex symbol Clara Bow who died in the 1960s and Marilyn Monroe who passed away at 36 in 1962.

I had a chat with Joanne after the last of her 25 shows at the Assembly Roxy which left her a little emotional and temporarily in loss of her voice. She related her career to date, her early life in Adelaide, South Australia and her training at Flinders University.

Joanne spoke with some pride of how she managed her photo shoot at the giant 50-foot high Hollywood Sign that overlooks Los Angeles, for which she had to ask permission from the Hollywood Sign Trust. 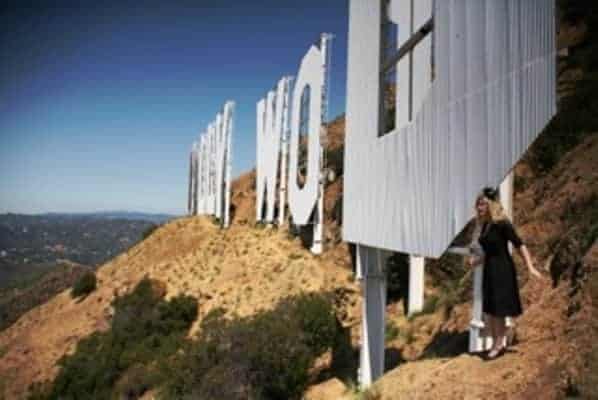 She says she has based her character Evie Edwards on the real-life case of Welsh born actress Peg Entwistle. Beset with personal problems, Entwistle committed suicide in 1932 at age just 24 by jumping off the `H` in the enormous Hollywood Sign. Her body lay undiscovered for two days but a suicide note was found which read: “I am afraid, I am a coward. I am sorry for everything. If I had done this a long time ago, it would have saved a lot of pain. P.E.”

Far from her character, the outgoing Joanne while saying she adores performing also says she does not want to be a superstar with all the extreme demands made on the likes of the subjects of her show.

This was far from her first Edinburgh Festival, which she has been visiting for a decade.

She recounted to me how she toured the UK in a production of David Mamet’s `Oleanna` in 2008 and she produced it at the Adelaide Fringe in 2009 and 2011. For her performance as Carol in `Oleanna`, she was nominated for Emerging Artist of the Year by the Adelaide Critic’s Circle.

Joanne is also an experienced producer as well as performer and she was the producer of the Centre for International Theatre (CIT) in Adelaide since its inauguration in 2010 – to much critical acclaim.

She has worked with award-winning international companies, producers and artists, and has presented over 25 international theatre productions in Australia.

A globe trotter, in June this year she took her one-woman show to Los Angeles where at the Hollywood Fringe she was awarded a platinum medal and won `Best Solo Show` (female) by TVolution.com.

A reminder for all film buffs down under: the Adelaide Film Festival runs from this Thursday 5th October till Sunday 15th October. The next Adelaide Arts Festival is 2nd-18th March 2018. Joanne will be there!