James Morrison, Australia’s international jazz virtuoso and ‘master of brass’ will join acclaimed London Brass musicians in a special UK concert to demonstrate the versatility of brass and show off the skills of each talented player. 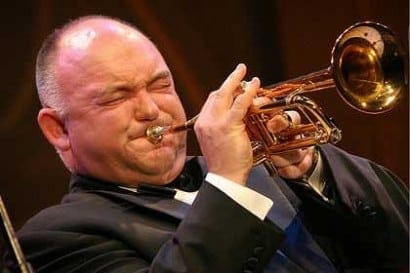 JAMES MORRISON, Australia’s international jazz virtuoso and ‘master of brass’ including trumpet, trombone, euphonium, flugel horn, tuba and saxophones — and not forgetting the piano — will join acclaimed London Brass musicians in a special UK concert to demonstrate the versatility of brass and show off the skills of each talented player.

Morrison’s early skills are legendary. At nine he formed his first band and at thirteen he was playing professionally in nightclubs. His international career developed fast. After h just turned 16, he debuted in theUSAwith a breathtaking concert at the Monterey Jazz Festival. Performances at the big European festivals followed — including Montreux,Pori, North Sea, Nice andBern. He has played with many of the great names of jazz: Dizzy Gillespie, Cab Calloway, Woody Shaw, Red Rodney, George Benson, Ray Charles, B.B. King, Ray Brown and Wynton Marsalis; and at the most famous jazz clubs — the Blue Note and Village Vanguard inNew York, the New Morning in Paris and Ronnie Scott’s inLondon. He has performed royal command performances on two occasions for Her Majesty Queen Elizabeth II and forUSPresidents Bush & Clinton at Parliament House inAustralia.

Loved and revered in his home countryAustralia, Morrison also has a large following inBritainand his return to these shores is a greatly anticipated one. But aside from touring the world, he is also head of Morrison Records, an independent Australian label dedicated to the best of jazz. And when the ‘master of brass’ isn’t writing film scores, composing or being patron of several youth orchestras, he relaxes in some fairly unconventional ways for a musician — competing in triathlons, abseiling, flying his private plane or driving in a rally championship. His love of cars is well known, as he was host of the national TV program “Behind the Wheel” — the Australian version of “Top Gear”.

With interests so broad and a career so filled with highlights it seems that he has done just about everything anyone could want — but not so. When asked: “What is there left to do?”, his usual reply is the typically exciting: “This is just the warm up!”