Jackman brings Broadway to Australia and UK fans want it too

Hollywood star and Australian idol Hugh Jackman announced on Monday that he will return to the Australian stage consisting of a compilation of some of his best Broadway performances. But UK fans have taken to social media insisting their stages would be as worthy of the performance as those Down Under.

Although best known for his action roles in movies like Wolverine and X-men, the multi-talented Aussie has a love of Broadway and describes his Broadway performances as some of the best times in his career.

Of the “Broadway to Oz” show Jackman said it would be an “intimate look at my life, the stuff that I love”, an announcement to which fans reacted with delight, and was echoed across the ocean with Brits saying they would love to see the performance too.

Wish I could go back to Australia to see this. “@RealHughJackman: LIVE ON CONCERT. Broadway To Oz. #DreamComeTrue pic.twitter.com/adt9ZECMF9”

@RealHughJackman You’re doing this in every city in the world right, because if not there might be rioting.

@RealHughJackman Would really love it if you did some shows in the UK too! 🙂

@RealHughJackman Broadway to Oz to London??? 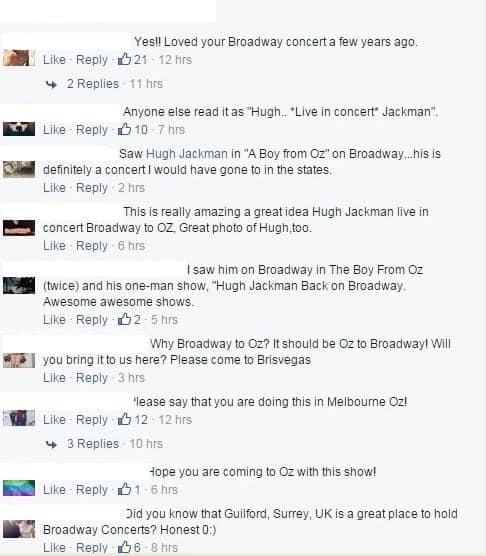 “It’s pretty much all about me. You are going to get to know the real me in that show. I will tell you what it’s like being in my shoes,” Jackman said about the show in a press conference in Sydney on Monday.

The show will be based on his 2011 Broadway show, “Hugh Jackman: Back on Broadway” and will map his journey from Australia to Hollywood as well as pay tribute to classic musicals.

“I’m a big lover of movie musicals,” Jackman said, naming “Singing in the Rain” as the greatest in that category.

The show features 150 dancers, musicians, singers and a choir, the show will tour Melbourne, Sydney, Brisbane, Adelaide and Perth in November and December